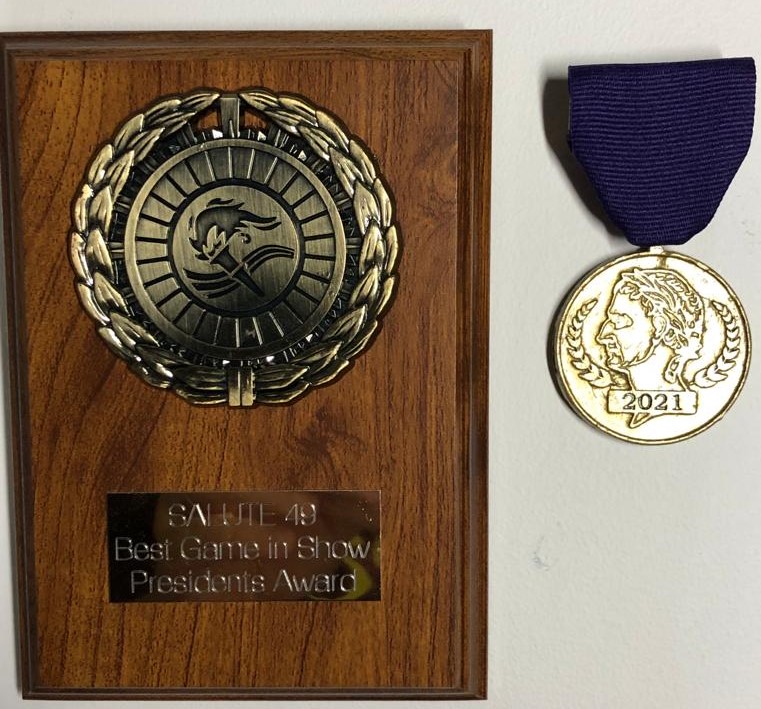 A few days before Christmas I was invited to speak on Sean Clark’s podcast Gods Own Scale, where I covered some thoughts and reflections from the year that just passed (link below the picture, if you want to check it out).

It is always great to catch-up with Sean and it is well worth checking up his back catalogue if you are not already familiar with it.

Anyway as a kind of complement I will do a quick overview of some of the things I did on the hobby front this year (mainly an organised listing of links to blogposts). As always in doing the review I realise that I have been doing far more than expected.

I continued some exploration of 3D printing and came to the conclusion after a lot of printing that I should stop just printing and just keep things back until I intended to paint stuff, avoiding creating yet another mountain – this time in resin instead of lead. On the whole I really enjoy using the printer and the result it produced – it has not really reduced the amount of stuff I buy but has given me some options for doing alternative stuff. Here are few of the stuff I did do.

More details on this here

I also commissioned some 6mm miniatures to be used as commanders for my GNW 6mm stuff. I did 5 minutures in total, the one below shows Stenbeck at Helsingborg in 1710.

More about that here and the other miniatures that I commissioned.

Further Progress was made on my Swedish 1943 Project and I added some more tanks and armoured cars (well trucks). I also did a high level army list for O Group, the new game from Too Fat Lardies.

More about this project here

The only big 6mm project I did start in the year was the Forces in Holstein 1700 as part of the start of the Great Northern War. This offers two very colourful opposing armies and the potential for a very interesting wargaming experience – in reality there were no big field battles, but this project offers some exploration of this.

I also bought some already painted 6mm ancients that I rebased and quickly got my 6mm Ancient Punic War collection substantially increased. I also did a summary blog on a lot of the #6mmtips I have shared on twitter over the last few years. More on these projects below.

The Battle of Lund 1676 6mm and the 6mm Charity Project

This year I took the Battle of Lund 1676 to the Virtual Joy of Six event, I ended up doing a video to present the game and also talked about the Charity Project that was completed last year. There are some links to two video that was produced to support these projects.

I did a lot of terrain projects this year most notably I did a lot of clutter, or immersion markers as I prefer to call them, for the 1943 table, but there are some generic ideas you could use for other theatres and scales. I also did a fair few buildings and fields.

These projects has allowed me to create some really immersive battlefields, like this one. Here a little video that Des Darkin did showing off the table laid out using many of the terrain elements produced this year (thanks Des).

I did some further work on my Fantasy Ice hockey project and we are developing some alternative rules to use. More on some conversions and some 3d printed models below.

Those were my main activities for the year, here some of the smaller projects that was done

I received two awards this year, the Caesar Award for the Blog of 2021 organised by Little Wars TV and also the Best Game in Show (Presidents Award) at Salute for the 6mm Poltava 1709 table.

Here a video made by Alex at Storm of Steel covering the show with an interview with Nick and I discussing the battle.

A lot on at the moment with work and the fact that No. 2 daughter is heading off to University soon. However I have been progressing a lot with smaller stuff, doing 30 minutes here and there and taking a little bit or extra time on a few models I have been intending to do for some time. It is impressive though how it all kind of adds up doing a little bit here and there – I might be able to tackle this lead (and other materials) mountain before my 154th birthday. Talking about the lead mountain, I did take a hike on it and found some old Doctor Who miniatures I had bought at some point in 2019, and as happens it provoked me to buy a few more (funny how that always works, one down, two more bought, like one step forward, two step back).

Being a hard core fun of the series and remembering fondly watching the fourth Doctor a few years after their original airings on some early satellite channels back in Sweden.  I was working weekend distributing leaflets and selling a Sunday broadsheet newspaper (Dagens Nyheter) to one of the poshest areas in my hometown – guaranteed sales and plenty of tip.  I was 12 and it was a great Sunday earner for a fair few years. Doctor Who use to air early in the morning and I used to set the clock early to wake up, collect my leaflets and the newspapers and then watch the Doctor Who whilst having my breakfast then off to earn some monies to buy RPGs, adventure books and comics – amazing times.

Doctor Who – Pyramids of Mars

This is one of my all time favourite Doctor Who adventure, evocative, scary and bloody brilliant. Here are few shots from the adventure.

I did the Mummies, Suketh on his throne, two of his servants, Namin and Marcus Scarman. I already have the Doctor somewhere. I also painted Leela, standing in for Sarah Jane, who was originally in the adventure. All models are from Black Tree design – I really like these.

I intend to use these playing some scenarios using the Doctor Who miniatures games (I think it was produce in 2010). It was available free for a while and I managed to get hold of the game and a fair few Scenarios.

I believe the system is very similar to the current 7TV ruleset by Crooked Dice. There are scenarios for a number of different Doctors, I have ordered miniatures for Black Tree for the following scenarios. These are also scary and atmospheric.

These were the codes I got from Black Tree, but will have to get some additional fillers from other ranges, like the Tong Cultists, a Range Rover for the Unit soldiers, etc.

And I did do the miniatures I would need for the Warriors of the Deep last year, but I do think I ever wrote a blog about it, well another time – this is my second favourite Doctor Who episode (and there is no Tom Baker in sight!).

So loads of Whovian fun lined up with some of the finest episodes.