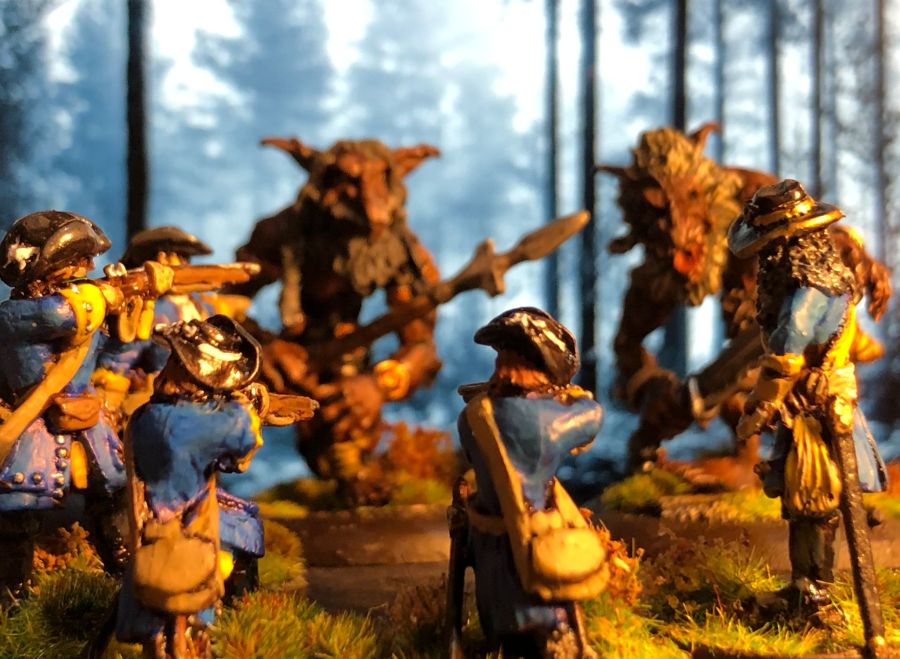 Following the Swedish Victory at Lund in December 1676, the Swedish terror has intensified and the Scanian population are suffering. You are part of a small band of Scanians fighting what you see as the Swedish occupation following Scania being captured by Sweden in 1658. You are not Swedes, you are Scanian men first and Danes second, you will never become Swedes. You are currently operating in the area around Lund and there are whispers of strange events that the locals think are associated with the corpses lying in piles after the battle until the winter had lost its grip on the frozen ground and they could be buried in the ground. For months they were lying there robbed first of their material possessions by greedy locals second their souls taken and ravaged by God knows what. The nights seem darker and the howling of the wolves sounds like the raging frenzy of the Fenris Wolf of the old pagan stories, something has risen, something evil, a Dark Master sneaking in the forest. Trolls, goblins, demons all are now common place words amongst the scared population and is causing added complication to what is now mostly a small scale conflict. Scouting parties on both sides have been attacked, killed and a few survivors often driven to shells of the men they once were speaks of shadow fighters, quick moving beast looking like men but with superhuman strength and speed. One of your scouting parties has gone missing and you sit around your campfire and discuss the recent events. Suddenly one of the sentries appears with his hand on the shoulder of a young girl, perhaps only 12 winters old. She looks exhausted and terrified, she looks at you and falls down on her knees in the snow and clutches here hands together as she would be revealing her soul in front of the almighty himself, she looks at you with strong eyes and for a moment feels mature and focused beyond her young age, “Freeshooters, I am Milda, the daughter of Conrad son of Eskil, I need your help to find my family. Something took them, something that came from the forest…”, she gasps and collapses ….”

The latest game from Osprey is the Silver Bayonet, and is basically a Skirmish with Supernatural overtones in a Napoleonic, setting. Know it really tickled my interest at several levels but for me the Napoleonic era is not one I particularly get too much into at the moment. However since I read a lot about the battle of Lund 1676, in the Scanian War fougth between Sweden and Denmark, I always had this thought about the 10.000 dead after the battle in December that were not put into holy ground until several month afterwards, due to the difficulty in digging frozen earth. If there was ever a time when something ancient and evil could have gotten a hold of something this would be as good a contender as anything else.

So in a nutshell I will be playing game but based in Scania (Sweden) in 1677 as written with the exception of using rifles and treating everyone as having muskets so this limits the choices a little bit. Both sides will have attracted specialists with some occult experience and the Swedes have raised a Cavalry regiment, the Silver Spurs to investigate issues and to deal with them. The Danish have also sent some specialists to support the Danish forces and the Freeshooters (Snapphanar) in the area,

Here my two starting units, I am already thinking about adding a separate unit with Danish Soldiers and a Unit of Scanian Collaborators (Swedish Loyalists) so we could do a 4 player game.

The Scanian Freeshooters (Officer and 6 soldiers) – Officer and 100 points

Let us hope we can get a game in soon, still waiting for some stuff I have bought to represent the unknown but I a few things to throw in, in the interim. A series of shots (from when Bauer and his troop got attacked by some Trolls), you could supply your own narrative, the troll are from the excellent Fenris Games (link here).