Frihamnen, Stockholm, 1985. The writer Michael Petersen and the illustrator Peter Johnsson have joined forces to discuss a synopsis for an adventure for the Basic Rules of Mutant [a fantastic Swedish Post-Apocalyptic Rpg, that I wrote more about here]- “Nekropolis”, the first part of two in the campaign “Den grå döden” [The Grey Death].
Michael: It is going to be an epic campaign!, the players have the future of the Pyri Commonwealth in their hands!”
Peter: ”Will it be a spy story?. I have an idea about drawing agent rats in trenchcoats.”
Michael: ”Yes, the adventurers will be chased by the agents of Ulvriket. Mutated rats sounds good.”
Peter: ”Where is Ulvriket?”
Michael: ”Denmark. But forget all about pils, sausages and rock festivals. It is more like the Easterlands in the Heart of Darkness [This was a setting from another of the Companies Rpgs, think Mordor]. Proper Evil.”
Peter: “Do I need to draw ladies in bikinis with well proportioned attributes for this adventure too?”
Michael: ”No, it is more older blokes in robes!”.

I really enjoy the Grognard files podcast and the throwback to the good old days of 1980s roleplaying.  If you have any interest in roleplaying games (rpgs), whether you were around then or not, this is a fantastic show and you should try it out (here is a link to get you started). Being of the somewhat mature nature (not old! – I still bloody play with toy soldiers, so I go for mature or perhaps in need of some maintenance, but never old!) for me this is a proper non-imaginary deja vu experience – I do not just feel like I did it, but I really did this before.  I have played many of the games, back in the day, covered so far (often in multiple podcasts, and in addition podcasts have covered rpg magazines and fanzines):

Each game is thoroughly discussed, analyzed and reflected upon. Being a guest on the British Isles since the mid 90ies it is at a level of eccentricity that I recognise well and that is hard to find anywhere else.  It is similar to the exploits of those Victorian chaps who invented industrial breakthroughs in their back garden sheds.  I absolutely love the concept.  Bravo to Dirk, Blythy, Ed and the rest of the crew (not forgetting the eminent Daily Dwarf, link here).  I suggest you brew yourself a cup of tea and get a pack of hobnobs and sit down in your favourite chair and listen to the first episode on Runequest. The only thing that may prevent you from having a fantastic time is your ability in making a decent cup of tea!

We, my friends and I who grew up in a small Swedish provincial town, had a gaming group running for many years and we were also part of a local rpg club called Aut Vincere Aut Mori (translated from Latin as “either to conquer or to die”). We did play a lot of the games covered in the Grognard show but it was intertwined with some local (Swedish) produce including Mutant and Drakar and Demoner (literary meaning Dragons & Demons) – they were fine products and would be classified as belonging to the Basic Roleplaying family of systems – with “3d6” characteristics, percentage chance to succeed, and further not level based, i.e. a shot in the head is as deadly when it hits you whether you are a snotty teenager with an eagerness to see the world as when you have conquered it.  Sorry, but I never got over the level and Hit Point thing or regimented bundle approach to progress in life! – although I had some great experiences playing games like Dungeons & Dragons in the day – but it was not the system but the GM who made it a fantastic experience. But I digress..

I have been thinking about my own Mutant 1984 project recently and how I will take this forward.

From a Blog entry last year, link here for more.

When we played rpgs back in the day we very rarely used miniatures/flats when we played and when we did I am not sure it really enhanced the experience as we did not tend to plan it very well.  I always felt it broke the spell of that wonderful world we all had in our heads that was built-up by narration and imagination.

The idea is that I will recreate some of the action scenes from some of the early Mutant Adventures starting with the Nekropolis scenario.  In essence breaking the scenario down to a series of tabletop games, that can be used as part of playing the adventure or as an independent game. It was a relatively straightforward scenario, with a few Game Master leads to push events forward (if the players do not think of it, X will suggest so…).  The scenario is long out of print and I am not aware of anywhere you could get hold of it nowadays and in addition you would need to be able to understand Swedish to get through it.  I am still debating on what miniature rules to use, if you have any ideas comment on this page or send me a message through the site.  There would be about 6 adventurers, with some supporting cast, against the rest of the world,

WARNING – what follows will contain spoilers.

I will try to stay true to the original story and the characters if possible but I will use some artistic freedom when I find something else more interesting or where there is a lack of suitable miniatures.

Scenes I will cover are presented below (with a note on the scene and then miniatures needed):

I suppose this would require the Cabin itself – and the set-up will be so that it allows action inside and outside.   In addition I would need Wintery terrain around, of which I have plenty of from the Winter War Project (that I am working on in other news).  So a cabin needs to be built with enough room to allow miniatures on 2 pence coins to move around inside.

4 normal soldiers of the Ulvrikets army,  I already have these. They are based on WW2 Americans to represent the relatively high tech army of Ulvriket.

A NCO (mutated dog originally, but I will use the mutated Ape NCO for this)

I added the picture below some time after the original blog entry (for completeness, this is the merry squad of soldiers, with Winter Bases)

The Commanding Officer – he is a mutated bear, it is a big guy with the mutation berserk. So I will base him off a Reaper Bones Werebear that I have ordered.  Have to make him look a little more of an Officer of the Ulvriket army though, so some green stuff will be required.

I did finish this one after the event and wrote about it (see link here), here is a picture of the final result. 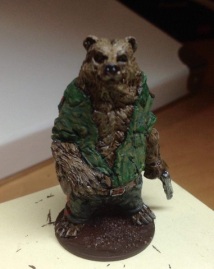 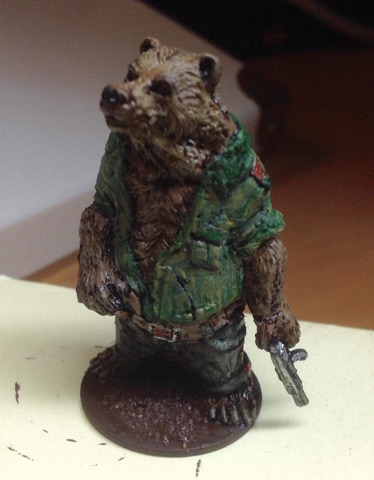 Night Attack at the Inn

The in(n)side of the Inn (parts of it) – maybe this would be done best by using foam core with printed on detail.  I got inspired by listening to Jay on the Wargames Veteran podcast who discusses foamboard, to almost Grognardish level of detail – great show indeed, it is number 33 (link here).

6 normal soldiers – have these, see above or below!

Thin man with a Submachine Gun – I was looking around but could not find something to fit the bill. But then I stumbled on a Sherlock Holmes figure from CP models today and ordered it and CP Models also do some loose SMGs so a little bit of work and I have my man with an SMG. Pictures below from CP Models webpage (here and here).

Nekropolis HQ – this is more of a Dungeon, sorry I meant Bunker, crawl.  May do some foam core corridors or just play the final encounter scene. More thinking to be done.

14 soldiers (a few of them being mutants) and 2 officers – as these will be inside a heated bunker I am not sure the immersion works with greatcoated soldiers with Winterized bases!  So I got myself some WW2 Americans from Warlord Games (here), that I will use a basis for these guys. It will also give me an abundance of loose weapons useful for converting other miniatures for this project. 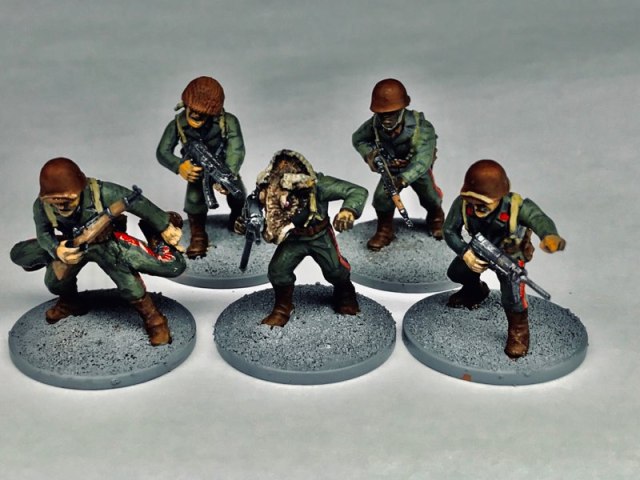 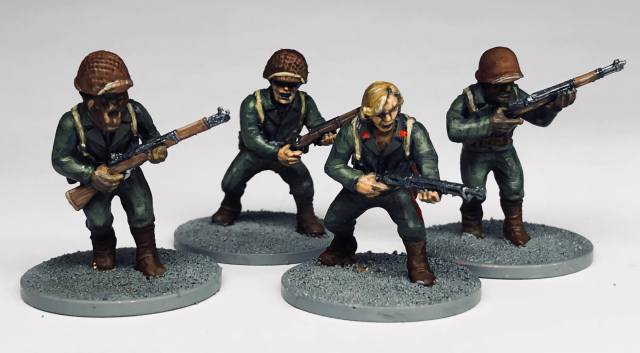 2 mutated birds – not sure how I will use these in my take on the adventure. But I found these beauties from CP Models (link here).  They were originally suppose to look a little bit pathetic than these mean looking birds.  I did some modifications to them to make them less aggressive looking. 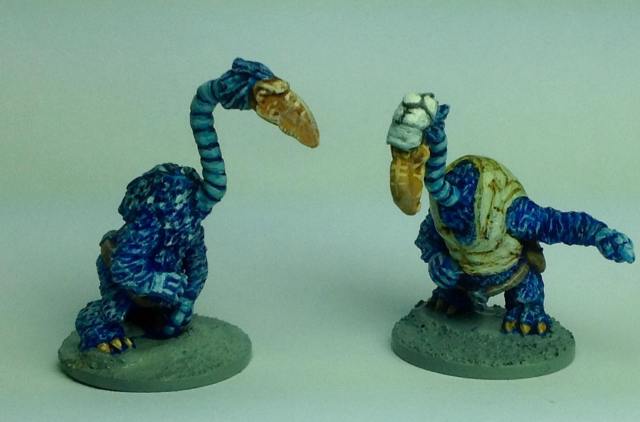 4 scientists – I have ordered some from Crooked Dice that have a nice selection, one of them with a little pet (a little bit more sinister than a cat, I suppose)  pictures borrowed from their site – excellent miniatures overall, link (here and here). 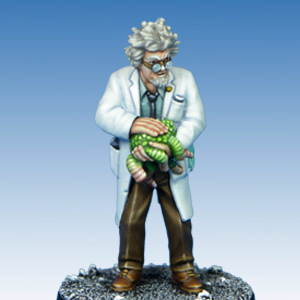 2 Older blokes in robes – still looking for some perfect miniatures I know are hiding somewhere in the house.  I think they were from Black Cat Bases but I can not reach their webpage at the moment.

In summary not so much to do on the miniature front, but some builds to be done.  The second installation of the mini-campaign (Bris Brygga), includes a scene with 20 airships to worry about. Have to think that part through a little bit more.

Progress will be slow as the next few months will be dedicated to this years Joy of Six battle. Anyway phase 1 completed – another £60 to add to the lead (and plastic) mountain.

8 thoughts on “Older blokes in robes! work in progress and the Grognard Files”