When I was 12 my cousin came by for a visit and he told me about this new thing, at least as far as I was concerned, called role-playing and a game called Mutant – one of the few Swedish roleplaying games on the market at that time.  By the end of the day he had convinced me to buy a set and the following day we played the introductionary scenario “Uppdrag i Mos Mosel” (Mission Mos Mosel). 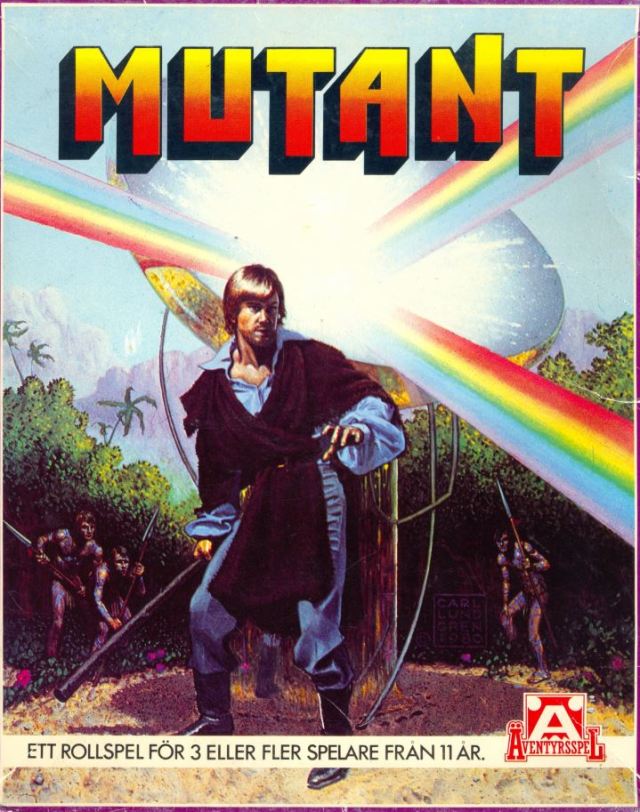 The session blew my feeble mind away and very soon some friends and I played RPGs on a regular basis up to our very late teens and had a great time. We quickly moved onto other games like MERP (those covers were fantastic and so many supplements released), Call of Cthulhu (explains a lot you may think), Chill (A more structured approach to fighting horror), Star Wars (roleplaying in medias res), Champions (with a very good and balanced points system and a lot of freedom required to design superheroes and not just mortal men), Warhammer Fantasy Roleplay (The amazing Enemy Within Campaign), Gurps, Drakar och Demoner (A Swedish system), Runequest (the Avalon Hill stuff, we mainly got exposed to the Avalon Hill stuff and Glorantha came later), AD&D 2nd Edition (I never really liked the system but the GM was so brilliant in creating a story that held together, with a number of subplots, over a long period of time that I do think this was the best campaign I ever played). Some great adventures were had and some of the characters played I still remember fondly – like the Tyr Cleric Lour Hawklin who adventured the Forgotten Realms with the Eavesdrop adventuring Group or Armorman the Super Hero, that was a shameless copy of Iron Man,  to name two of these legends.  I digress badly on this. However, I always retained this nostalgic and very fond attachment to that very first role-playing game that we played during the early years.

The background blur of the game makes me reflect on these wonderful words by H.P. Lovecraft, “We live on a placid island of ignorance in the midst of black seas of the infinity and it was not meant that we should voyage very far”.  Basically following a deadly and incurable epidemic caused by samples from a mission to Mars the human civilization collapses.  The survivors build enclaves and start experimentation on humans and animals, in effect creating mutants, to see how they will survive outside the enclaves.  However conflicts arises between the enclaves and it leads to a nuclear war sealing the fate of the world.

The game evolved and underwent a lot of development (see here) and today there is a very interesting new version called År Noll (Year Zero) that is set in an earlier (and wilder) period.  I may pick this up when the nostalgia gets the better of me (there is an English version produced by Modiphius, you can read about it here).

So why have I been rumbling about this?

I got this urge to do a little miniatures project as a homage to the 1984 rules and perhaps my lost youth – call it a miniature wargamers mid-life crisis.  I thought I would make some small warbands of say 10 to 15 miniatures for each little gang/unit/fellowship.

Pyri Soldiers  – a unit of soldiers and their officer and say two NCOs,  mainly equipped with musket and bayonets/swords but with a few carrying some old technology weapons like a sniper rifle and some automatic shotguns to add some flair. In addition some mutated animals and humans being part of the group.  Uniform to be based on the 95th rifles from the Napoleonic days (think the Sharp Movies) but painted in a blue Colour with some buff detailing.  Pyrisamfundet (The Pyri Commonwealth) is what today is central and southern Sweden and this was the centre of the adventures produced for the game. Some conversion of miniatures therefore required. I got a pack of Warlords Miniatures Chosen Men (link here) and also two female 95th rifles from ebay (Seller plantanmachineryguy). 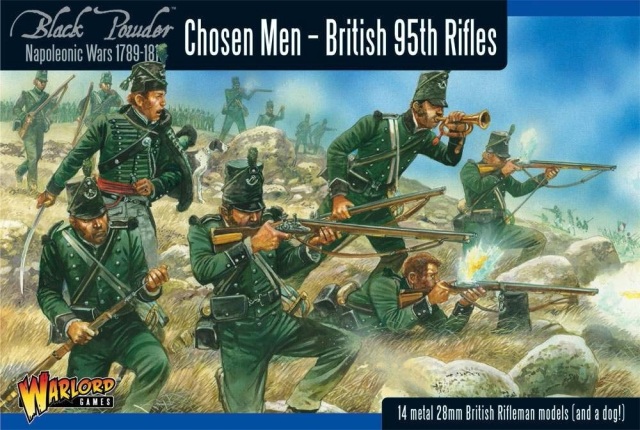 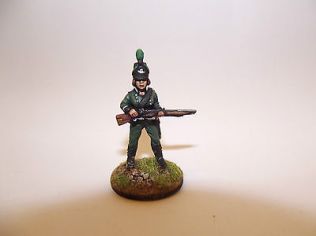 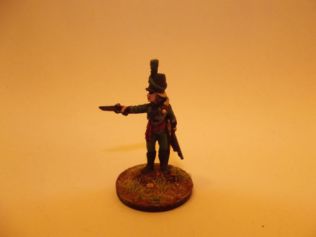 This is the unit almost completed, I have some tidy up to do for the hats and hairs before I seal them. 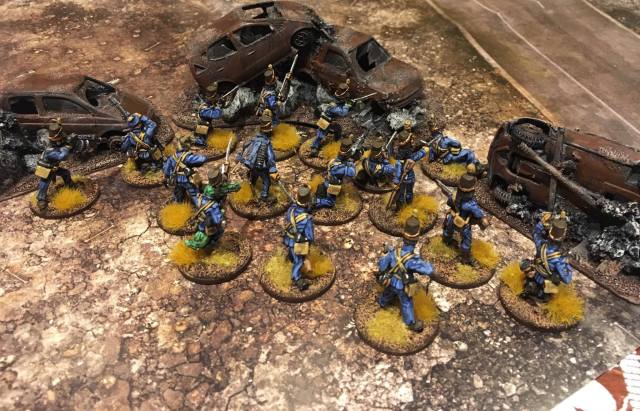 The Crocodile and Dog heads are from the Killers set produced by Crooked Dice (I have another use for their bodies of which more in a later blog entry) as part of the Grandville range (see link to them here).  The Sniper Rifle and the Automatic shotguns/grenade launchers are from Anvil Industries (link here).  Overall it works for me, sufficient input of some high tech and some mutants to make it look surreal enough in combination with the old fashioned Napoleonic uniforms.  These guys may have been sent to the Forbidden Zone on a rescue mission, to look for a criminal or to retrieve some old high tech.

Ulvriket Patrol – more of a high tech unit with some old technology rifles, SMG and LMG. These will be based on some American WW2 infantry in Great Coats and the Uniform painted in a Military Greenish colour with red stripes on the trousers and some red on the collars.  Again some of these would be mutated animals, so some conversions would be required.  Ulvriket is a country in the South (Denmark) who is a little military dictatorship with some unclear ambitions. As a basis I got some of the nice Americans in Great Coats from Artizan Design (here).  I am eagerly waiting for these models. 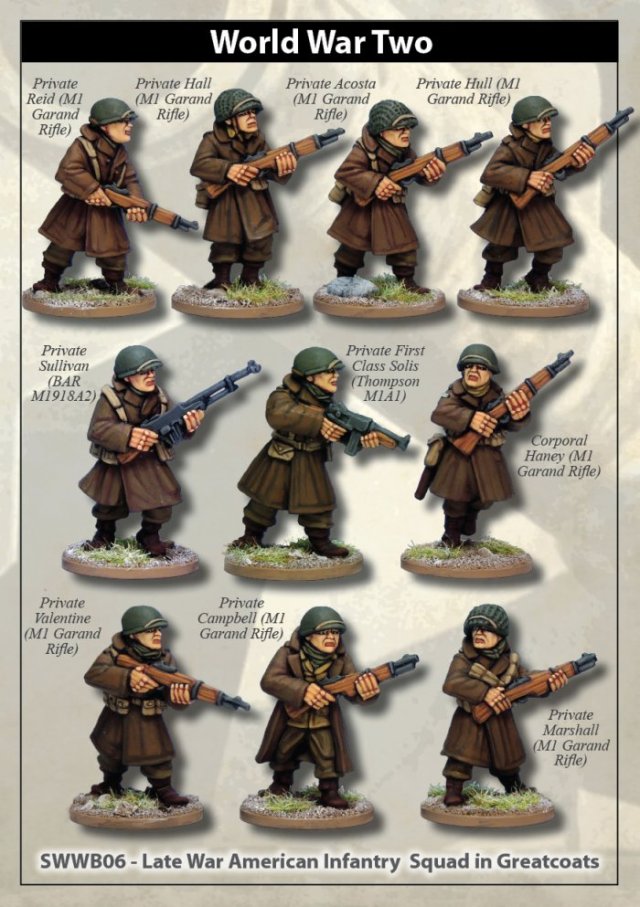 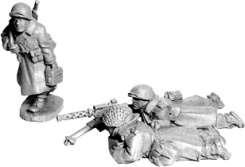 Zone Explorers / Adventuring Group – this would be a motley crew of mutated humans and animals who would be roaming around looking for something. Perhaps some psychic characters too. Basically a large RPG group! A mixture of weapons both old and new technology. Lacking in military prowess but with their own surprises up their sleeves.  There are some nice models out there that would fit the bill and this is probably the funniest gang to do. I have ordered a bunch of miniatures from various manufacturers including CP Models, Rapier Miniatures, Crooked Dice, Interloper Miniatures , Moonraker Miniatures and Black Cat Bases. As and when I finish some of these I will give details from where I got them in future posts on this subject, this will be the most interesting unit to build.

My best find, to date,  are probably the models from Interloper Miniatures. Here area a few pictures taken from their webpage (see link above, great stuff). The models really fit what I would like to do. 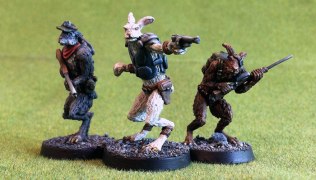 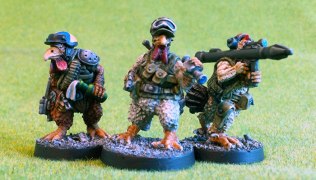 Security Robots – this would be a force of security robots that were still operational protecting some old installation or having got some malfunction in orders and being more mobile.  I have a number of Terminator robots that are all ready to go for action.  The 1984 angle works brilliantly as this was when the first Terminator movie was set.  All done, the models can be seen in some old blogs (including here ). 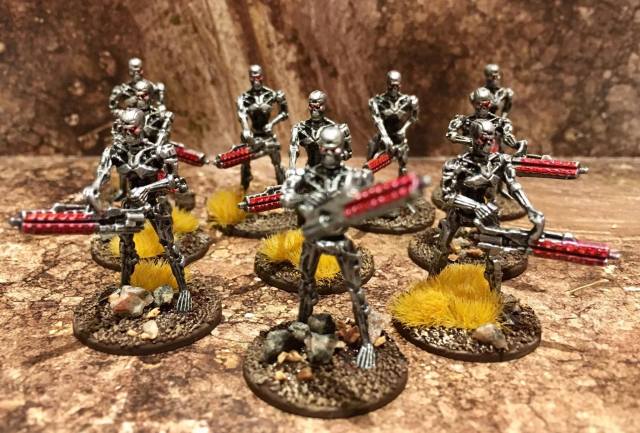 Further I intend to use the Resistance Fighters from the terminator game to use as a unit of humans from the past who have been woken up from hibernation. 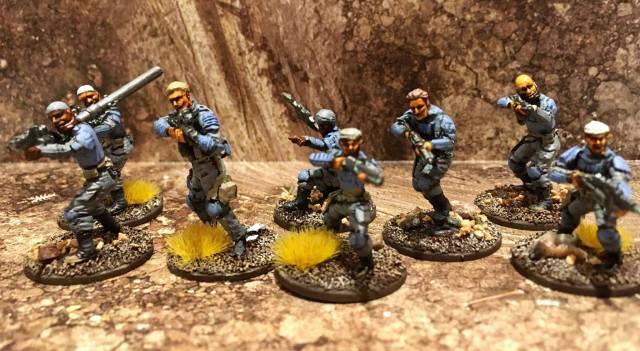 I am also thinking about doing a gang of Cultists (perhaps a bunch of “brown hooded” anti-mutants) as I got a box of Frostgrave Cultists (here) with the Sci-Fi conversion kit (see here). 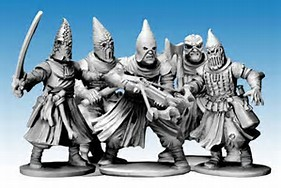 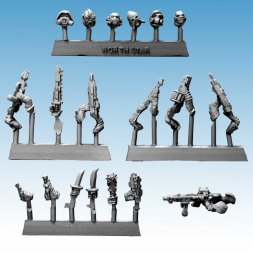 That is a total of six gangs and I have already ordered all that I need.  The original cover (see above) had these strange looking primitives with bluish tattoos and spears not sure if there is a good range out there – let me know if you have any ideas.

for the terrain I intend to use the terminator stuff I already have for a start.  I also recently got a battle mat from hexy-shop (link here) that I intend to use.

For rules, well this just caught my eyes and they seem to fit too without too much modification.  The rules are called Scrappers  and is a set of Post-Apocalyptic Skirmish Wargame Rules from Osprey, see further link here. It will available by the end of April. 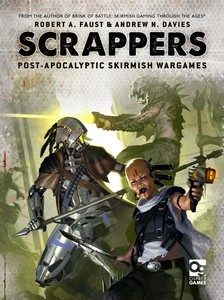 The blur is almost spot on and I felt obliged to do a pre-order.

“More than 150 years have passed since the apocalypse that nearly destroyed the Earth. Today, the planet is a torn remnant of its former glory, ravaged by nuclear fallout and mutagens. New lifeforms – Mutants and Synthetics – challenge True Humanity for dominance, while warring factions compete for survival and supremacy, and all must carve out their place in this brutal landscape, or else perish as billions before them. Scrappers is skirmish miniatures game set in the wastelands, where players assemble Scrapper Crews and send them out to scavenge scraps of Ancient technology and battle rival factions. Explorers, cultists and raiders clash with mutated creatures, robotic soldiers and embittered True Humans in this wargame of salvage and survival in the ruins of the future.” – From the Osprey Homepage on Scrappers

There is also this review that I found informative.  I probably need to do a few tweaks but I do think this diversion is easier to realize than I initially thought! I hope there are rules for musketry! This is a long term project and I am not sure at what speed it will develop as I really need to focus on the two 6mm events coming up – perhaps the pace will pick up in the autumn. But I am feeling good about it.  The good news is that I will have some miniatures to do a test game fairly soon after the rules arrive.

/ Hope that was of some interest! Next time starting to wrap up the things for the Salute Show.

13 thoughts on “Mid-Life Crisis or another diversion? – Mutant 1984 with Ospreys Scrappers – Part 1”