A lot of things going on at the moment with limited relevance to any hobby related matters – so not much progress lately.  They only thing I did do was to do some work on the mutated bear I talked about in one of the blogs last time around (see further background here).  This is a character to be used for one of the protagonists for my Mutant 1984 project – a miniature games/rpg hybrid kind of idea!  Not great modelling but perfectly adequate for my needs.

1980s Post apocalyptic rpgs on the tabletop, may be acquired taste but I absolutely love this little project! 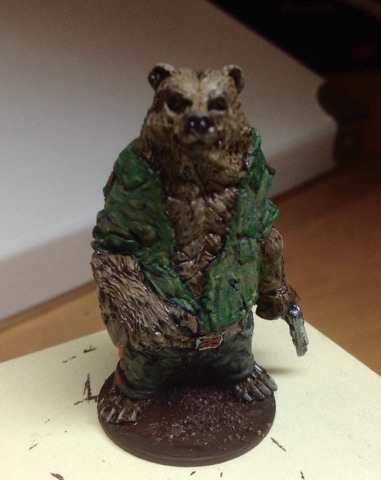 This guy is a mutated bear and also an officer in charge of a small border guard unit.  I wanted him to look like he has been caught off duty perhaps listening to a tape of the 1812 Overture on his Sony Walkman – that he found in the forbidden zone in the Aarhusse region, when he served as a close combat specialist in a Zone Hunter Unit.

His sharp and clever mind, physical strength combined with his immunity to radioactivity, diseases and poisons meant he had survived situations were other soldiers had perished.  His many exploits and successful missions were the foundation of the legendary status he had obtained within the Zone Hunter Unit. The unit specialises in operations deep in the forbidden zones to fight back the never ending threat from its inhabitants to the more civilised part of the peninsula. He had quickly climbed up the ranks and was appointed as the chief of the Aarhusse Zone Hunter Guard Battalion with the rank of Major. Although mutants were allowed within Ulvrikets forces it was uncommon that they held any commissioned ranks.

However his bad temper and aggressive ways in which it manifested itself in his treatment of his men and his superiors caught up with him.  When Knud had smashed in the face of a Colonel and proceeded to tear his arm off, the army could no longer tolerate his behaviour. Not even his status as a recipient of the 1st Order of the Wolf Medal could protect him from the Martial Court proceedings. It surprised him that he had not been sent to his death, as was common practice in the forces, but instead of the a firing squad he found a demotion to Lieutenant and a placement in the Border Guard units.  Shortly afterwards he was made aware of the identity of his benefactor. He was approached by one of the General staffs external advisors, Thomas, who explained that he had great plans for the bear.  What those plans involved he did not yet know. In the discussions with Thomas he had felt that he had met an equal in terms of logic and intellect – something he was not used to within the force he served.  Thomas explained that he had to be patient and since then he had been sent to various postings and low level assignments. Knud is aware of the influence of the Advisors (or the Grey Brotherhood) and the positive impact they have had on the recent successes of the army on the battlefield. This on the surface seem to stem from the supply of military high technology but Knud believes the real impact is their support in training the officers.  However he has not yet (as he would like to phrase it) been privileged to any more information, but hope to be accepted to such a training programme soon.

Knud spends most of his free and active time in the border cabin room listening to music, skimming military training manuals, reading from a selection of books he has collected over the years or playing chess on an electronic machine that Thomas has given to him (A Novag Chess Partner 2000).  He has tried to control his anger by engaging in calm activities but every now and then his men literary wakes up the sleeping bear.   In combat he is a cunning tactician, controlled and resourceful and will never give up and will fight his enemies until death.  He is armed with a Submachine gun and a primitive high caliber one shot pistol.  If cornered or heavily injured he will go into berserk mode, ignoring any effect of damage until death and attacking ruthlessly with his claws.

The NOVAG Chess Partner 2000 was launched in December 1980.  It was the first sensory chess computer produced by both NOVAG and SCISYS. However it was not the first sensory chess computer that the world had seen as CHAFITZ was already selling their ARB Auto-Sensory Chess Board with their Boris 2.5 and Sargon 2.5 Chess Modules in the spring/ early summer of 1980. Fidelity had also followed CHAFITZ with their Fidelity Sensory 8 in June, 1980.

Chess Partner 2000 has eight levels of skill and per the manufacturer complies with international chess rules (automatic castling, pawn promotion/under-promotion and en passant). It also allows board corrections and square and piece verification. You can enter your own board positions to solve chess problems up to mate-in-2.  Another neat feature is the MM (Multi-Move) sensory control square that enables you to enter your own choice of book opening before you start to play your game against the computer, from the position you had entered.

The chess pieces are stored in a compartment that is situated along the right side edge of the computer.

More about NOVAGs machines and Chess Computer in general here.

Sorry a way off from the short description this guy got in the original scenario but I wanted to have some motivation in getting him done.

I started with Reaper Bones model I bought off ebay.  It is basically a bear that stands on his hindlegs only, holding a very large battleaxe. 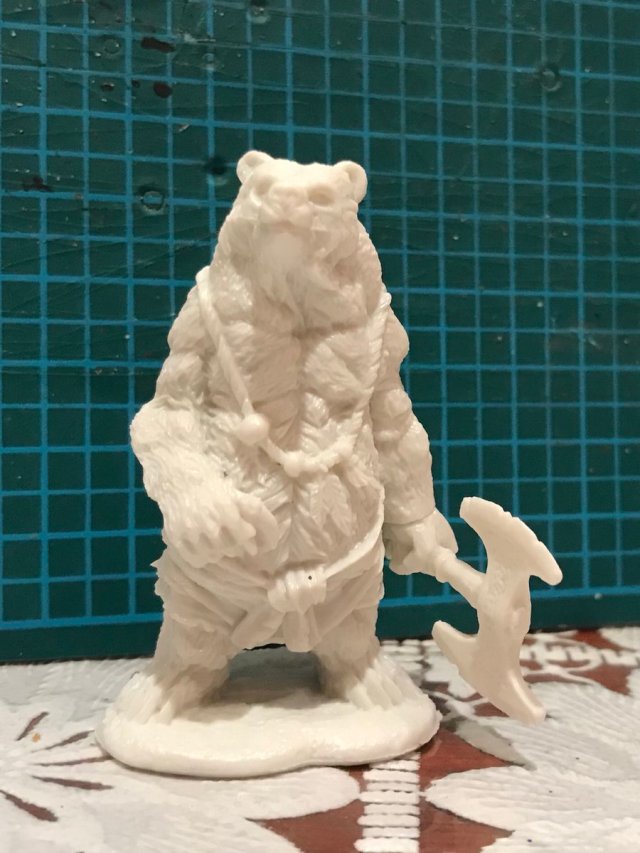 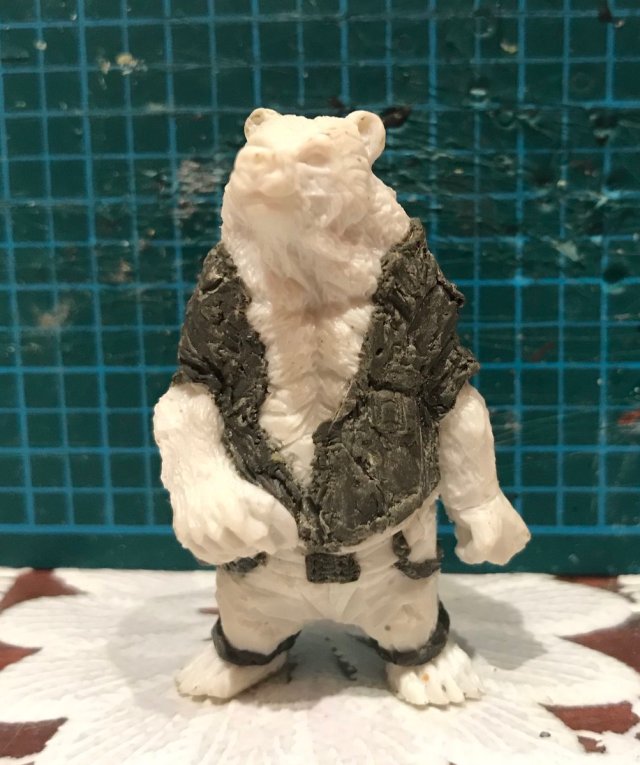 I also added a SMG from the CP model range (link here) – I have no idea how he can use this weapon with his big paws? (I suppose some mods has been done to it). I then painted him up.  The result is more of less the look I was looking for! 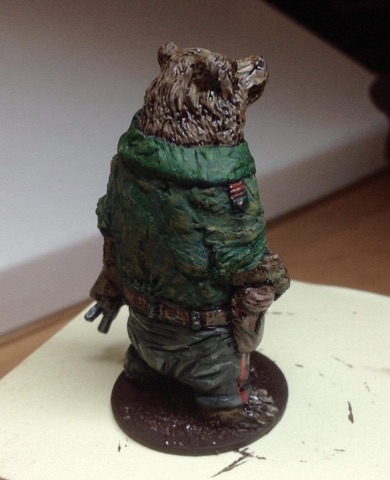 / Take care, until next time!

2 thoughts on “Limited progress, but bear with me!”

My Tweets
Join 2,725 other followers