Following on from previous discussions with regards to replaying some of the Scenarios for the Mutant roleplaying game I have been doing some further thinking and practical work.  Link here for a better background (with more stuff here, here and here).

The Mutant game this relates to is the Swedish game from 1984. This is my stain and rustless first love and the game is the forefather of the current fantastic Mutant – Year One game, by Swedish company Free League published by the British company Modiphius, link here. [The Mutant 1984 version was set in year 108!] The team also publish the eminent Tales of the Loop – Roleplaying in the 1980s that never was that is one of the most beautifully looking gaming books I have ever seen. The artwork by Simon Stålenhag is amazing (if you do not know what I am talking about, check out his homepage here!).  You should check out both these excellent games!

Tales of the loop – Roleplaying in the 1980s that never was

The landscape was full of machines and scrap metal connected to the facility in one way or another. Always present on the horizon were the colossal cooling towers, with their green obstruction lights. If you put your ear to the ground, you could hear the heartbeat of the Loop – the purring of the Gravitron, the central piece of engineering magic that was the focus of the Loop’s experiments. The facility was the largest of its kind in the world, and it was said that its forces could bend space-time itself.

Scifi artist Simon Stålenhag’s paintings of Swedish 1980s suburbia, populated by fantastic machines and strange beasts, have won global acclaim. Now, you can step into the amazing world of the Loop.

In this roleplaying game in the vein of E.T. and Stranger Things, you’ll play teenagers solving mysteries connected to the Loop. The game rules are based on Mutant: Year Zero, which was awarded with a Silver ENnie for Best Rules at Gencon 2015. 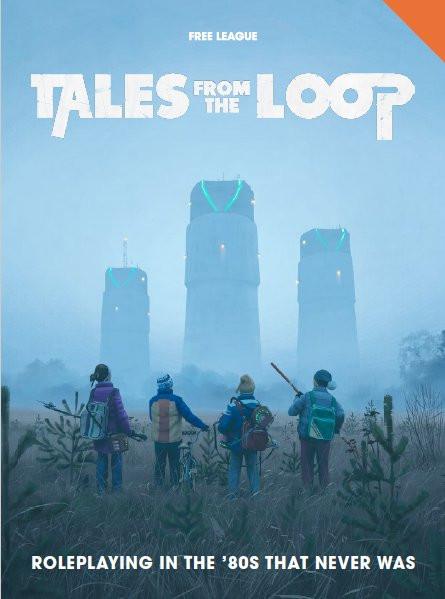 From the Modiphius webpage, here.

…goes back to the origins of the Mutant franchise: role-playing after the Apocalypse. In this game, you play as one of The People – heavily mutated humans living in The Ark, a small and isolated settlement in a sea of chaos. The outside world is unknown to you, and so is your origin.

Mutant: Year Zero has two major game environments, each with its own style of play:

The Ark, your home in the dawnworld. A nest of intrigue and Lord of the Flies-style power struggles, it’s far from a safe haven. But it’s the only home you know, and just maybe the cradle of a new civilization. The game rules let you improve and develop the Ark in the areas of Warfare, Food Supply, Technology, and Culture. It is up to you, the players, to decide which projects to embark on.

The Zone, wastelands outside the Ark. You will venture into the Zone in search of food, artifacts, other mutants, and knowledge – not least about The People’s own origin. The game includes two maps of example Zones; London and New York and a plethora of tables and other tools to let the GM populate its sectors with mutants, deadly monsters and bizarre phenomena. 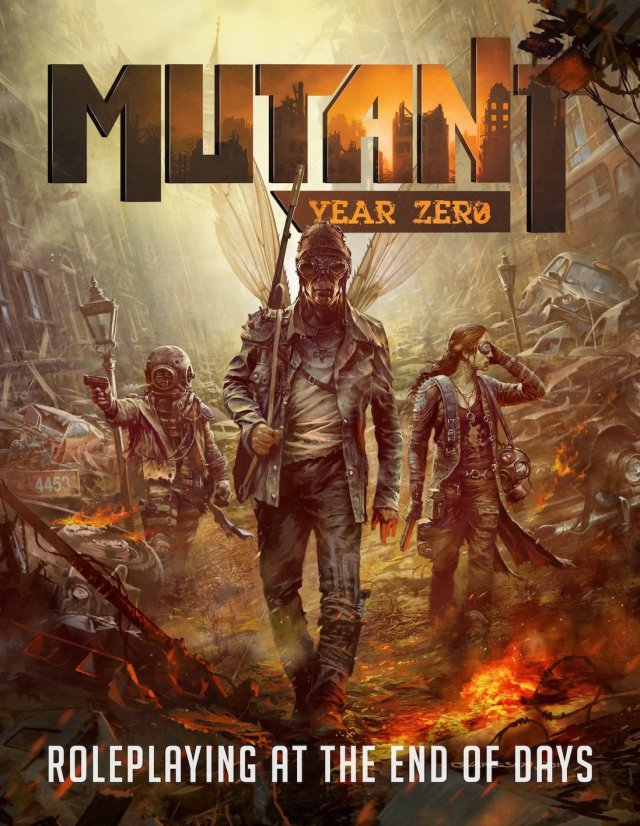 From the Modiphius webpage, here.

Having debated on how I will play the scenarios, I have decided that I will use the Original 1984 rules with some inspiration from the Mutant 2 expansion (produced 1986) and also some inspiration from early Runequest as I really loved the grouping of skill categories and individual bonuses based on characteristics.

Mutant 2 had an interesting combat system with segments and a high dexterity character acted more often than a low dexterity character.  This Mutant 1984 2.0 project wants to be a simple as possible and therefore fatties (like myself) can act as often as anyone else – however we may be less efficient when we do so.

I have devised a character sheet that should be not too unfamiliar for anyone who have played Runequest or Call of Cthulhu – the characteristics range in general between 3 and 18 and all skills are percentages.  This is still work in progress and I will finalised these shortly (and the Mutant Logo is scanned from the original 1984 cover – I have not rights to this one whatsoever. However I hope this tongue-in-cheek project gets the right owners blessing as opposed to its cursing).

For the purpose of playing the set events more like “skirmish wargame scenarios” I will need to devise some simple rules – so far 7TV (from Crooked Dice, link here) looks promising and it also has a nice campaign feel for connected scenarios, or should that be shows.

From the earlier posting you may recall the cabin I need for one of the events in the first scenario (see here).

I suppose this would require the Cabin itself – and the set-up will be so that it allows action inside and outside. 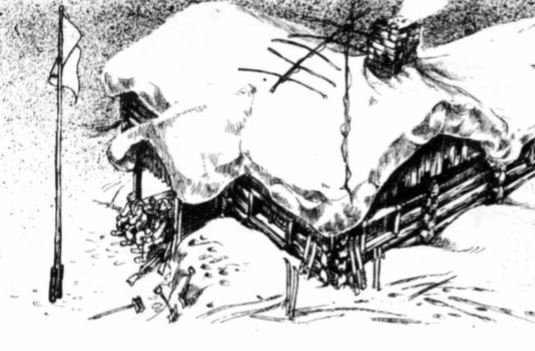 Based on the floor plan I sketched the cabin on a piece of paper and used some figures to make sure the would work in the setting – no point spending time on a building that does not work for the purpose of playing in it.

I made some modifications to the layout and the final layout became a square cabin with two of the small rooms being combined to a large one and a new one created.  I decided to build the cabin on a piece of Polystyrene (Blue Foam) I had laying around.  This piece was a 20mm thick piece and I will utilise this for the detailing I will do later.

Next I drew the floorplan on top of the blue foam and used some balsa wood dowels (5mm diameter) and set out the shape in one direction (glued them down, make sure they overshoot with about 1 cm at this time) and then cladded each room (glued down) with some cut out pieces of coffee stirrers (you know the ones they have in coffee shops). I varied the direction of the planks for each room.

The idea is that we need to make cuts where the timbers crosses to allow the characteristic look of a log cabin.  You need to make some cuts and then slightly file it down (I just used the rough part of the Exacto knife I have – as balsa wood is really soft).

Basically cut down a v shape and then rub the rough part until you have a round groove half the depth of the dowel diameter.

If you are using hard wood dowels you have my sympathies and this would take even longer than the pain I had in using the balsa wood. 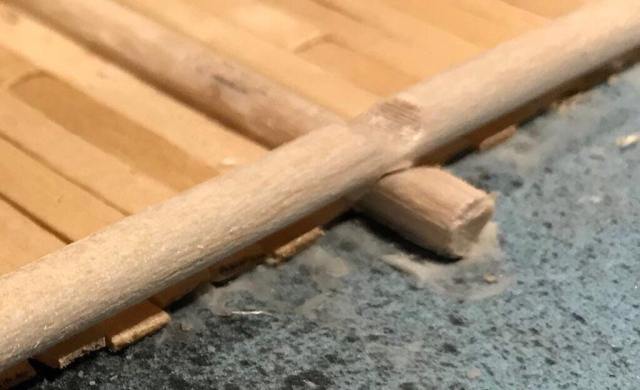 Just continue doing a layer in each direction – cut, glue and then I used dressmakers here and there to make the construction sturdier. Be careful and go slow – balsa is a very soft material indeed.  The models are Soldiers of the Pyri Commonwealth, any similarities to Napoleonic British Riflemen are just incidental. 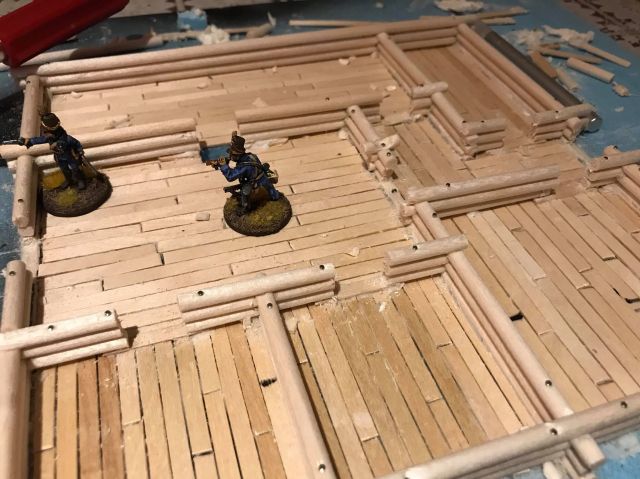 and more layers…  then cut out some windows (at this stage I have no idea how I will finish them). 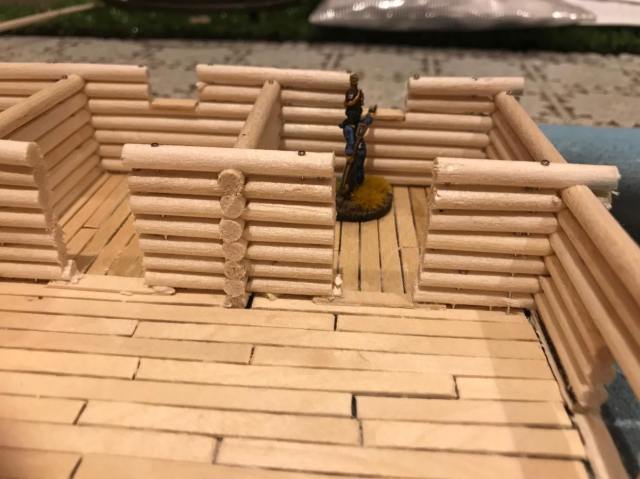 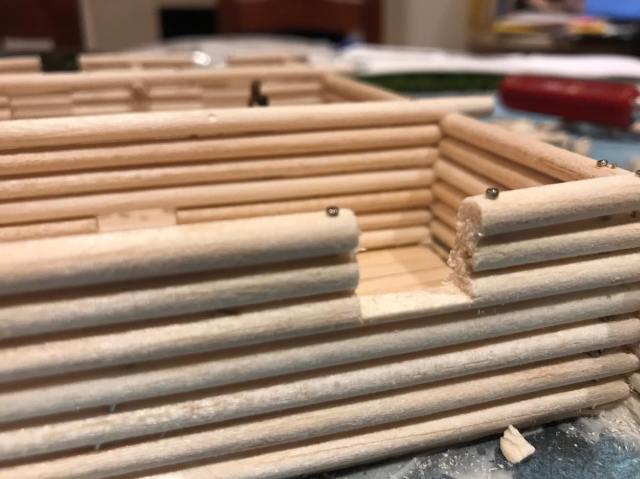 Then after a few sessions

I cut out something resembling a fire place and made a roof from a 6mm thick piece of floor insulation board (polystyrene foam).  I then made a roof from the same material and cladded the sides (the roof will be mainly full of snow so most of the insulation foam will be covered with this. 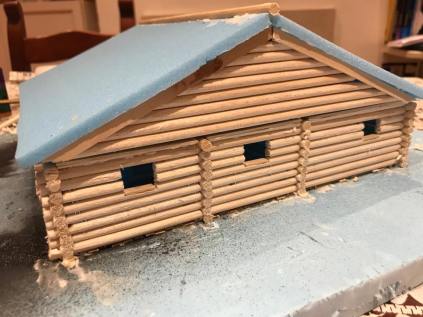 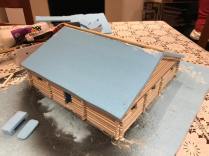 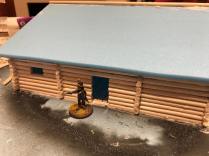 Then I added a porch on the front, some chimneys (6mm foam using a pen to make a stone build effect), a few planks to make the illusion that the whole roof is made of wood (i.e. where the snow will not go), did a first layer of builders caulk on the roof. 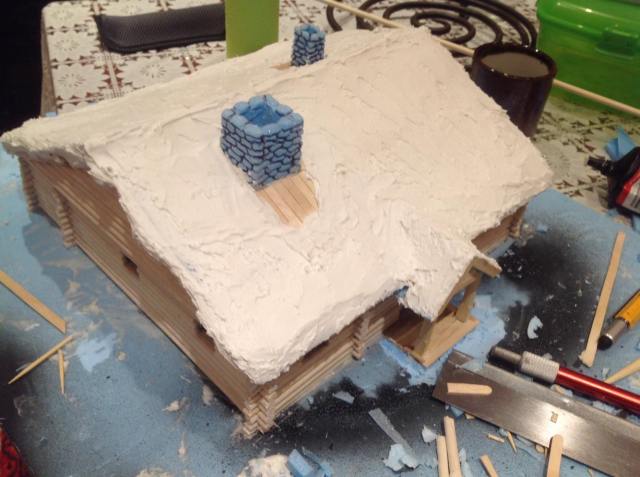 Very happy so far with the Cabin (working title “Overkill”) I will probably detail the surroundings and paint it before I:

But that is next time,

/ Hope that was of some interest, if not I blame Dirk of the Grognard Files for ongoing, constant and brilliant inspiration on gaming in a 1980s that damn surely was!  Check the Files out by clicking here and enjoy!