At some point this summer Rapier Miniatures (link here) were showing off some work in progress of some 6mm Gloranthan Bison Tribe cavalry. “Glorantha is the mythical world that can be found on the Other Side of our consciousness. First discovered by Greg Stafford over forty years ago, Glorantha has been explored in such games as Dragon Pass, RuneQuest, HeroQuest, and King of Dragon Pass (Taken from the Glorantha Webpage, link here.)”

The Tribes of Prax are a nomadic society consisting of a number of tribes based on a particular herd beast such as Bison, Giant Lizard, Ostrich, Zebras, Rhinoceros.  Some non-human races even herd humans.  In a nice twist the gods they worship forbid them to use horses, which makes finding proxy miniatures for Praxian cavalry difficult (I suppose you could make some zebras convincingly in 6mm with normal cavalry miniatures).

Nevermind, this range is spot on and I found out last week they were for sale, so I ordered a few pack immediately, it took them two days to arrive.

It did not take me long to get them primed up and ready for painting.  They were like a good book and very difficult to put away once I started.

I then painted them more or less in the same way, with some variance on shields and loin cloth colour.  I painted the spear heads and swords in brass simulating bronze weapons (as I had no bronze colour – I may get some and do some highlights).  I based them on 50 by 25mm MDF bases – this because they would work with my Romans and Carthagians (based on the same kind of bases) and all my Saga armies (based on 25mm by 25mm bases).

Here some examples of bases for those other armies:

Anyway sorry for that diversion, you can read more about the Saga in 6mm stuff here.

Here are the pictures, and I was so happy I sent them to Rapier, and the gents put this first picture on their webpage.

That is the more large battle version ones, I did keep back a few for another purpose.  You may recall that I and the Little One ran a participation game at Joy of Six a few years back using the Dragon Rampant Rules (see more in the link here) – we have a large number of fantasy units, and the way we based them allowed us to play games on a very small table. So I did 4 units of elite Bisons, enough for a 24 point warband.

And in more detail,

I almost forgot that there are some stuff coming – Broos and Morkanths (and Rapier already has Scorpion Men), so the range is growing and I suppose it will grow quicker if you buy them! Here is the link again, Rapier Miniatures,  if you do not want to scroll up (link here).  They also do some 28mm very nice Glorantha stuff.

Here a few pictures I found on the net on more stuff from Rapier! 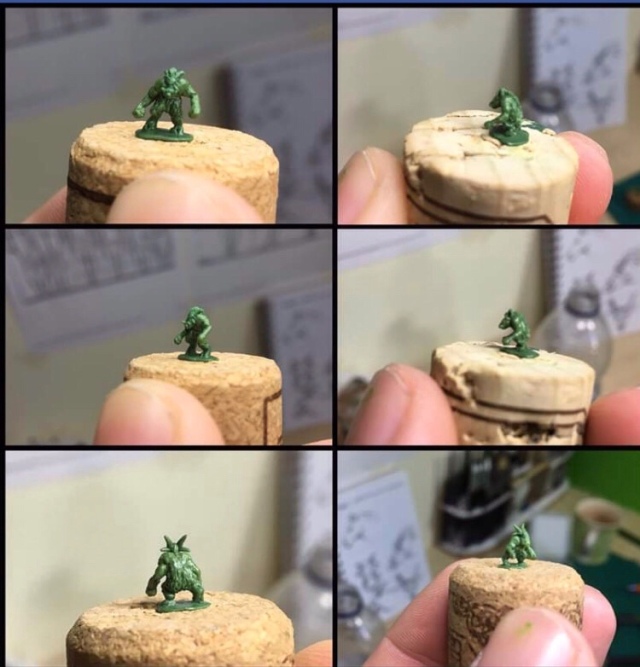 9 thoughts on “Riders on the Storm Bull”