I considered just putting up some old pictures and change the titles – I might get away with it for individual units but I am afraid it would fail en masse at the Joy of Six in July next year. Anyway, joke aside and in line with the promise I solemnly made to myself I did force myself to complete a few more bases for the Project. This time 3 No. Russian Dragoon regiments (As before these are from Baccus 6mm). 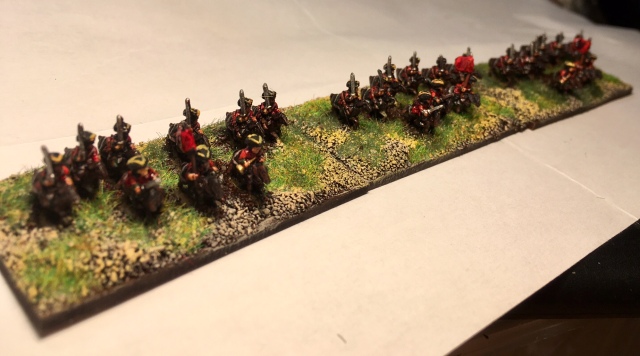 A little bit of an intro

The Winter War was the invasion by Soviet Union of Finland in 1939 (30 November) to 1940 (13 April) in order to protect its interest as it, amongst other things, perceived Leningrad’s proximity to the Finnish border being a security issue. This short war showed the difference between a bad & overoptimistic plan, inadequate equipment & training for the theatre of war, unmotivated & badly led men (remember Stalin’s 1936 t0 1938 purges of the Red Army leadership) against a disciplined, trained and mobile force of highly motivated soldiers who used the arctic conditions to its advantage. Although the Soviet Union won the war it was not the quick and total victory that had been expected.

Onlookers marveled at the Finnish resolve but more importantly the incompetence and seemingly badly preparedness of the Red Army was noticed by the Germans and this is traditionally seen as one of the contributions to the start of the Barbarossa Campaign in 1941. However, although the lesson was correct in 1940 it did not consider that the Red Army had learned a few lessons too. The sobering and embarrassing experience of the War led the Red Army High command to review its performance and from this implement a number of reforms including changes to tactics, logistics, communications and training of officers. It also introduced the wider use of field mortars to support infantry, toned down the role of the political commissar, as well as the wider use of submachine guns. Although these changes were not fully implemented at the start of the Barbarossa campaign, the Red Army in 1941 was not the same army that invaded Finland in 1939.

The family on my mother’s side are Finnish and I have heard many stories from this period – some heroic but most of them being about the sad realities of war and the people that had to endure them directly and indirectly.  For example one of my relatives, a pioneering educationalist working in the Finnish border areas, had to take home his two sons in coffins during the war – both of them were volunteers and the youngest was 17. My hobby is very much related to war and  I think it is important to remember that in reality it is far from a game.  This awareness does not take out the fun of it but adds respect to how I deal with it.

I recommend you read more about the conflict here and why not get a copy of the Talvisota/Winter War movie while you are at it.  There is a good youtube video with Sabaton’s Talvisota with clips from the Talvisota movie – you can find it here (this is a good one, did I say that?).  Other sources on the net that are worth checking out to start with are:

I find the following books useful and a good start:

I decided to do this project in 15mm and got myself a few packs of miniatures from Battlefront (yes 15mm Flames of War miniatures, sometimes you can find packs on ebay and other alternatives but if this fails buy it directly from Battlefront) as they were doing early war Finns and Soviets for their Rising Sun supplement (Well I got a fair few actually).  The packs are still for Sale and I think they are ok – in addition buy some loose heads from Peter Pig of the German WW1 helmet and you could even buy some Japanese helmets without netting (to simulate the Swedish helmets worn by some units, the Swedish M-26 helmet is being used to make fake Japanese helmets being sold on the collectibles markets), and some German field caps and fur hats and you have some headswap options to create some variety with the same poses. Similarly for the Russian side you can get some early Sovietic helmets (known as the M-36, these were replace by the more iconic SSh-39). Your winter war Russian looks best with the pointy hats and/or the M-36 helmets.

Peter Pigs head range can be found here – snip off the head and drill a little hole, put some superglue and attach the new head (be careful and you will be fine, it is worth it).

I have added some additional things using more Peter Pig (main page here) stuff, some old Resistant Rooster stuff (here) as well as a few really old True North stuff (here, but I am not sure they are still in business?).  But this is really for variety – the only issue with the Battlefront miniatures are the lack of LMGs.

Now to some more detail on the platoons, the Soviet Platoon this week and the Finnish Platoon next.

You can find the full army list from Too Fat Lardies here (The Platoon Force Rating is +6 for Regular and -2 for Green, 5 Command Dice when regular and 4 when Green. The Winter war forces are regarded as Green during the initial phase (Nov-39 to Jan-40) and can be regarded as Regular after that).  These are not elegant maneuvering elements – this is brute force! UHRAAAAH!

I tried to go for some variety to the coats but painted the pointy hat in the same colour (with the red star) using a field bluish colour – it gives a somewhat uniform look to the units. It works for me. I got some inspiration from some nice photos from this site – it shows some reenactors of the conflict – both Finnish and Russian.

NOTE: The bases are in desperate need of some modelling snow flock – not done yet. 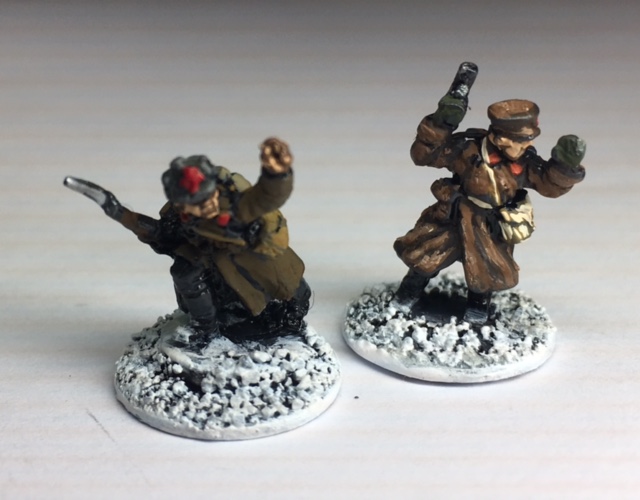 Squad One – Serzhant Kasatonov (Junior leader with Rifle), DP-28 LMG with two crew, twelve riflemen. All are from Battlefront. 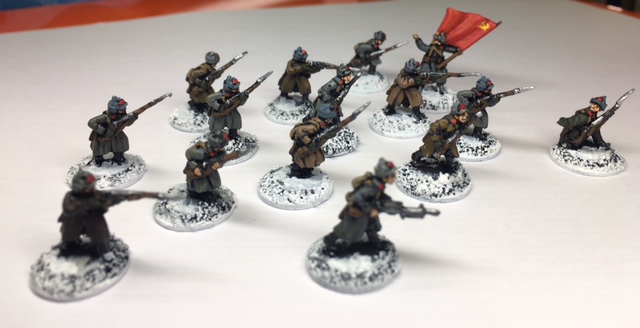 Squad Two – Serzhant Krutov (Junior leader with Rifle), DP-28 LMG with two crew, twelve riflemen.All are from Battlefront I added a flag bearer to each squad for show, not sure this is realistic – but it looks good. 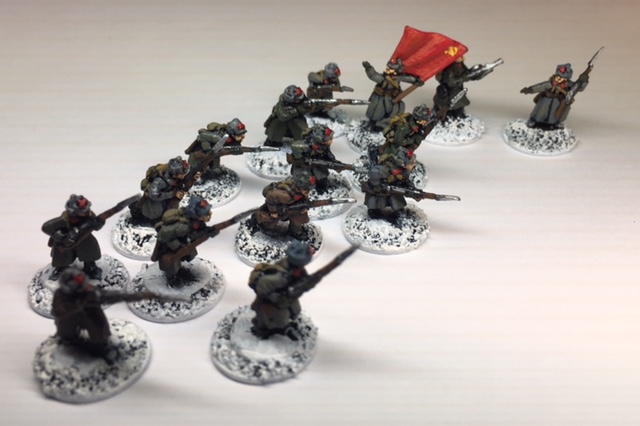 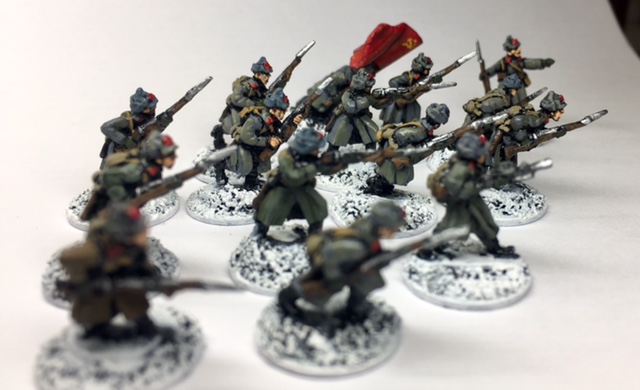 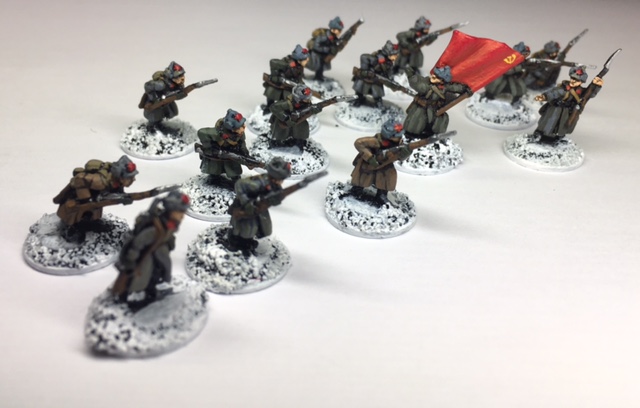 SMG upgrade – PPD SMG – I made a few SMG armed ones based on Peter Pig winter war Russians with headswaps (using heads from the Battlefront Peaked cap miniatures or the Early Russian Helmet Head packs from Peter Pig). Not a very common weapon at this time of the war.

SVT-38 Semi-auto rifles – did not do specials for these. They were being tried during the Finnish Winter War. If they are used we just make a note and get on with it. Slightly longer than the normal rifle and a with a cartridge magazine. The initial reaction of the troops to this new rifle was negative as it was felt it was cumbersome, difficult to maintain and the magazine could fall of the rifle.

Engineering Teams – 3 men for each (Mine clearance, Wire Cutting, Demolition or what ever). These are from the Battlefront Sappers pack.

Other more terrainy stuff have to wait until I do my next battle (Minefield, Barded wire, entrenchments)

Flamethrower team, armed with the ROKS-2 Flamethrower designed to be easy to conceal on the battlefield (22.7kg, effective range 25 meters, but could fire up to 30-35 meters). The Finns captured some of these and they were later put in use as the Add to dictionary M/41-r. Nasty weapons. The are from the Flamethrower platoon pack.

For the pathetic but charming T37 see picture below, do not have a T-27 Tankette or a BA-20.

Sniper Team – this is just a standard infantry model from Battlefront without the bayonet and his spotter.

Political Commissar/Officer – I think this is a headswap story with a Peter Pig body and a Battlefront Peaked hat head. He is screaming out communist propaganda whilst running into the sights of the White Death.

For the T26 see the tank picture at the end. These are Battlefront.

I need to paint the 45mm AT Gun and the 75mm infantry gun, I got both these from Battlefront.

I hope this was of some use, I will show the Finnish Platoon next week…

/ All the very best, and seasonal greetings! Keep toy soldiering on!