I have finally finished my France 1940 15mm Platoons I have been working on.  I intend to use these with the excellent Too Fat Lardies France 1940 supplement I bought some time ago (link here).  I have talked about the book before and it is a fantastic resource for any Platoon based WW2 Gaming.  Here they are, I used Skytrex (link here) and Peter Pig (link here) miniatures.

I bought the Little One a copy of the Airfix Battle game for us to try out over Christmas and we took it with us to the holidays in Sweden. He rather likes it and I thought why not ask him to write a short review/reflection of the game I have added it at the end of this blog post.

Airfix Battles – A review by the Little One

I find Airfix Battles a good game because everything you need sits in a small box – flat miniature soldiers, tanks and guns. The rules are simple to understand for a 10-year old wargamer. However I have played a lot of games before so maybe they are a little bit more difficult for you.  There a paper sheets that are used to play on and some terrain features you place on the mat. These are ruins, hedges and difficult ground.  It takes on some things that I like with WW2, such as Tigers, Bazookas and Pak-40 guns.  However, it is a little bit unrealistic as you can shoot in a curved trajectory (kind of) and mortars and artillery do not seem very powerful – I read in a book that artillery was the biggest cause of death in WW2. Also the ranges are a little bit strange, the MG-34, Browning and Sniper Rifle has the same range.  My Papa, that is what I call my dad, tells me there should be figures with the game, but we have plenty at home and the flats works well for travel.  It also shows how dangerous war is – so you have to manage your units carefully and protect your commanders as they are important to allow you do things like getting cards and playing orders.  You can also use the set to play other games on while you travel, we played What a Tanker using the Panzers vs the Shermans – that was fun!

The other day we used miniatures to play the game, it made my Papa a little bit happier and we had a very good time.  He does not like this game as much as I do.  I really like it.  There is also a way you can play against yourself in Solo mode – I like it and it is harder than playing against Papa because I roll very well for both sides.

I really like games and I think I have learned a few things from this one that I will try to use in my own rule set I have been working on.

As Papa would have said, I hope that was of some interest.

– The Little One (you can read more about the game here)

Below are some more of the pictures we have taken of our games. 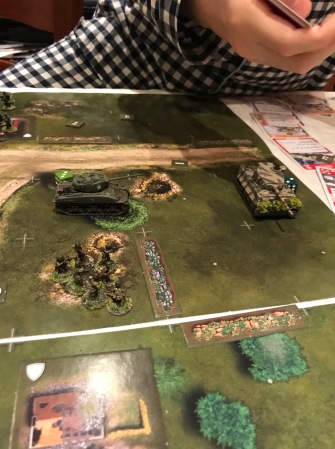 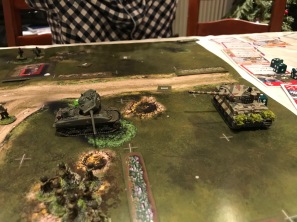