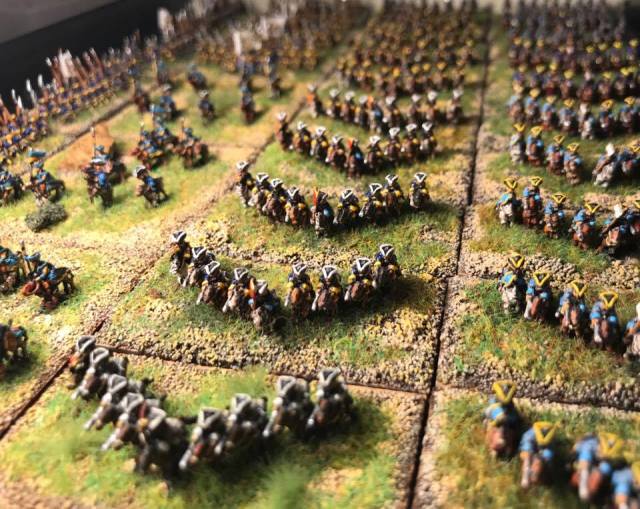 As you may be aware the next Great Northern War installment of the Towards Moscow Trilogy (TMT) is the Battle of Horka in 1708.  The battle did not happen but was inspired from reading Nick’s book on the Russian campaign and with the addition of some artistic, or should that be historic, freedom I think we have something good enough to work on and present at the next Joy of Six in 2018.  As always I will try to write a fair few installments here on the blog as things progresses (you can follow us here or like us on Facebook if you want to keep up with the developments or just come back every now and then).  Anyway let us do a little bit of an intro so we are all on the same page (as per normal I have included links to previous posting and some external sources that may be useful if you are interested).

The Battle of Horka

Having ousted the Danes out of the Great Northern War (see more here) by the invasion of Zealand and crushed the Russians with the decisive victory at Narva, the young Swedish Monarch, King Charles XII (Carolus Rex, Karl XII) had decided to turn his efforts to deal with the final member of the coalition that had challenged Sweden’s Baltic supremacy – Saxony / Poland.  It took him another 6 years before he had secured a treaty with Augustus the Strong.   However the King still had unfinished business with the Russians and the time had come to march towards Moscow …. (you can read more about the TMT project and some of the background here)

In the beginning of July 1708, shortly after his victory at Holowczyn (see more here), the  King had reached the Dnieper river with the Crown Army at Mogilev.    It was, he believed, the last major physical obstacle on the road towards Moscow.  The Russians had not made the advance easy as they had applied an scorched earth policy (the same policy that both Napoleon and Hitler would come to know later in history) destroying or removing supplies, burning bridges, withdrawing from villages, harassment of the moving army by irregular Cossack and Kalmuck light horse and dragoons, in combination with the constant rain (it had rained for about 4 weeks almost every day) that destroyed the crops and the hay and also affected the roads that further slowed down the March.  The Russians would not give the King the decisive battle he needed.  An army does indeed not only march on roads in knee deep mud but also on its stomach and there were still another 300 miles to Moscow – but as we know hope was on the way.

“So once the Swedes had secured the area around Mogilev they stopped to wait for Lewenhaupt and his vital supplies to arrive. … Meanwhile the Russian army had also halted and encamped, as the next obvious destination of the Swedes was the city of Smolensk, the Russians occupied a strong position on the road from Mogilev to this city.  The camp was at Horka, sometime called Gorki, a short distance east along the road to Smolensk. … The Swedes considered attacking the position but in the end did not. Had the done so it seem likely that the Russians would have stood and fought.”

So in our scenario the King gave the order to break up the camp and “Gå-På” towards the Russian position at Horka and the Russians did not slip away.

I will detail more about the assumptions on the armies that will clash on the day of battle in later postings.   In the background I have been working away on the Russians and they are in various stages of completion.  I had Chris from the excellent Marching in Colour helping me with a large part of the Lesnaya Russians last year and I also sneaked in a few ones for this project in the Order –  so I had a good head start on these, but there are still a lot of work to do.

For the Swedes I had enough painted lead already from various project to cover about 45% of the bases needed – so there is a little bit more work to do on this front as well.  Took out the miniatures from the Storage and took a few pictures whilst doing the inventory. 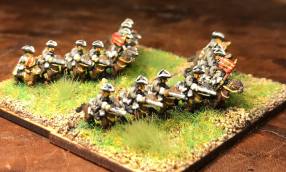 Here is the current list of units required for the Swedish side, this is based on the 35,000 strong army as at Grodno in 1707.

Unit – Name of the Regiment/unit