This was a nice weekend indeed, Saturday was spent driving around the Kentish/Sussex countryside and we went to Chartwell House (Churchill’s family home) and Penhurst Place (The Sidney’s family home for more than 460 years) – both well worth a visit.  On the way home we ended up in the Blacksmith Arms (in Cudham) where the comedian Harry Relph was born (1887 to 1928). He performed under the stage name “Little Tich” and was (amongst other things) famous for his routine with very long shoes (see a video here). They had his famous shoes on display in the pub – equally impressive with the Wellington boots we reported on some time ago (see here).  I knew immediately who he was as I had ended up listening to his 1910 recording “What a Risky thing to do” (see here) looking for some background music for a Call of Cthulhu campaign many moons ago.  A great, although not very tall, Briton (a Wikipedia write-up here).  I had a pint in his honour before we embarked on the short journey home.  I suppose you can do your own research on that other great Briton Churchill, if he is not familiar to you ;).

On the Sunday I went to the Skirmish Wargames show in Sidcup run by Redcoat Models(see here) – a small wargames show that occurs twice a year. I did not count the number of traders but call it 15 with about the same amount of wargames tables. The theme was Napoleonics and probably 1 in 4 of the tables were Napoleonic offerings.  I did not take many pictures but here is what drew my interest. I had a good time.

I played a game with John, who was running a fictional Battle in India with a Sikh uprising supported by French advisors (and some troops) against the British, using the Fire and Fury rules.  John had not laid on a table for 15 years but it did look good when it was all set up.  We used activation for getting reinforcements on the table but we both failed miserably but when we were successful John seemed to be able to get more out of each reinforcement wave – typically the French (yours truly) “spawned” one or two units whilst the British managed to get 6 to 10 units on the table.  It was fun and I managed to get a cavalry unit into the British outpost and steal a cannon.  However, the luck was only short-lived as they ran into a strong group of light infantry (Riflemen). One of those games that gets that narrative kick that makes all the difference in my view.  Many thanks John!, I think the game was yours 😉 .. Great fun.

Finally I had a nice chat with Glen Hardy of Art of War Shirts.  Glen has recently launched his business selling a nice selection of t-shirts that I think some of you may find nice – what I like is that they are nice designs and less in your face than some other offerings.  Do check out his webpage and get a few and/or let your better half and your mates know what you would like for Christmas (you know that any hard ones will be in the wrong scale or period anyway!).  Here is a link to his page.

As for any progress this week I am slowly doing some DreadBall miniatures (yes I did get a few more teams). Doing Forge fathers and some MVPs this week but no progress on Rommel stuff.   The Better One said to me the other day “I did not know you were into this game now!”, “Been working on it for years!”, I answered back having just ordered a few more teams on eBay.

I based the Forge Father colour scheme of my favourite Swedish Coffee Brand Löfbergs Lila. Purple with some green detailing for strikers, yellow for jacks, red for guards and blue for the Keeper.  Can you smell the nice aroma? 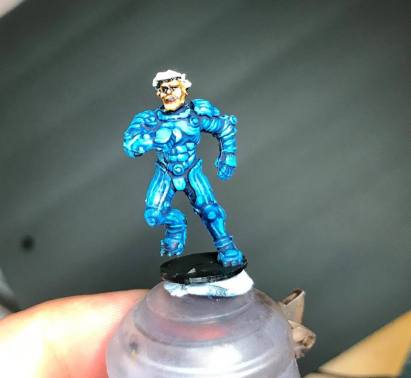 Talking about Great Britons, I could not avoid to reflect on the likeness with one of the MVPs and a very famous TV personality that recently passed away.  Anyway I let you reflect on your own.