If you have followed this blog you may recall that I have been working on a project relating to a “What-if” German invasion of Sweden in 1943 through the Dalarna County – where I “incidentally” was born and grew up. There is a good summary of where I got to with this project to date in a previous blog post (link here).

Dalarna, Sweden in 1943 does not look like Normandy or the Eastern Front and one of the challenges to create the immersion is to create an overall look that feels right. A lot of the existing wargames buildings and terrain are not suitable for this theatre – the Normandy buildings looks totally out of place whilst the typical eastern European houses, whilst in wood, does not neccesarily have the right look (the common thatched roof on many of these houses are not really suitable). However I have found a few houses, barns etc that will fit.

I have also, previously, talked about the typical red colour that was predominant, and still is, in the area – The Falu Red Colour (Falu Rödfärg).

Although the paint fell out of favour in the Urban areas during the 18th century the paint still survived and in the countryside, even today, is still the dominant type of colour. 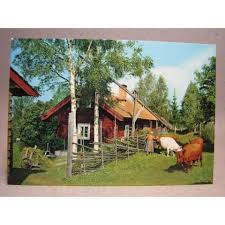 The origins of the pigments used for this paint was a rest product from the process of calcination of copper ore at the Mines in Falun, in the Dalarna county.  In the 16th century it was found that these pigments mixed with lineseed oil and rye flour worked as an excellent anti-weathering and preservative when applied to wood.

The Falu mine itself deserves a mention as it operated for 2000 years and at its most productive phase in the 16-17th century it produced more than 60% of the copper in Europe.  It even had its own regiment (with some infantry and cavalry units) during the Scanian War and Great Northern War era.

Every School child in the county visits the mine to learn about its glorious past – today it is not longer a working mine but a fantastic museum with a permanent exhibition as well as the opportunity to travel down to the depths of the mine.

As easy way to integrate your built up sections is to make tiles for a building or a set of buildings.  This allows a more defined look on the table and makes the buildings blend in better in your layout. I made mine from adhesive floor tiles from Poundland (they are made from vinyl) some acrylic paste (caulk) and sand.

Start by marking up where you want your buildings to go. I also consider the size of the fencing around the farm.

Then it is time to start the messy bits, with acrylics, sand and paint.

But what about these strange cars? Well if you study cars during this era, not just in Sweden you will notice the strange burners on other arrangements attached to the cars. These are utilising wood gas to power the vehicle due rationing of fossil fuels. I have rarely seen these on WW2 tables but very often in pictures so I made a few (based on some Kinder Egg vehicles I bought off ebay).

A game of Chain of Command

A few weeks ago the Little One and I had a small CoC (Chain of Command) infantry vs infantry game (with a tank each) mainly to test out the terrain and how it all looked together, we have a blast and we were really happy with the overall look.

I will let the picture talk for themselves.

Whilst I love playing in Normandy or the Eastern Front I have to admit that there is something special for me with this project in terms of passion and immersion.  For this table all it really took was a type or Fence and the colour of the houses to transport us straight to Dalarna 1943.

Yes the whole thing is made up but I am trying to make the rest of it justice. As you may have figured out by now immersion is very important for all the projects I do.  It takes an extra effort, but an effort I am more than happy to make.

If you have a what-if idea or a project based on some obscure location spend some time reflecting on how things looked – study photos and find those key elements that immediately gives it away – that is your primary focus for your wargames table. If these items do not exist – consider making them yourself or contact someone like Paul who has the talent to design something in 3d for your, make it printable, print and send it to you! (Sabotag3d.com).

I hope that was of some interest, toysoldier on!

13 thoughts on “Dalarna (Sweden) during the 1943 Invasion (What-if) – tiles, cars, a table and a small game of Chain of Command”