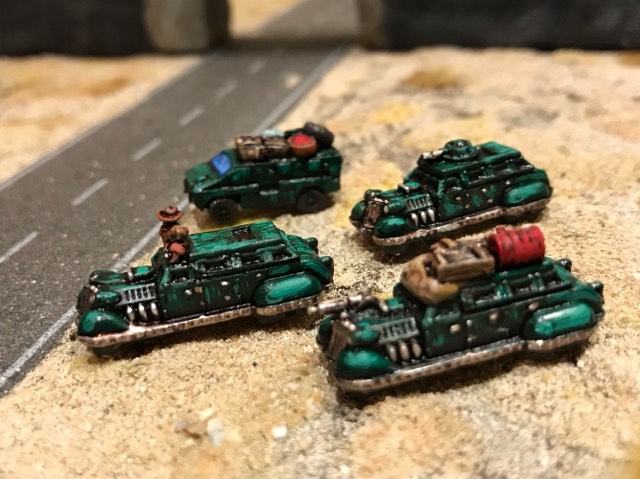 Following from the last post I have now received the 6mm post apocalyptic stuff I talked about last time, painted a lot of it already (4 “factions”), and I also had a trial game of the Road Wolf Rules with the little one (see more here for a background to this diversion).

I found a few compatibility issues between and within the ranges I used, but I will write about this in a future posting.

This is the first set I painted and this will be two factions – one called the “Metalheads” consisting of metal loving petrol heads with fine combat cars (from Irregular Miniatures) and the other being the “Bikers” (made from Bikes from Microworld apart from two from the Irregular Miniatures Mad Ron set). They work really well together.  I have another set of combat cars I will paint up a little more randomly with colour scheme to represent the more Punkish gang, but that is yet to come!. 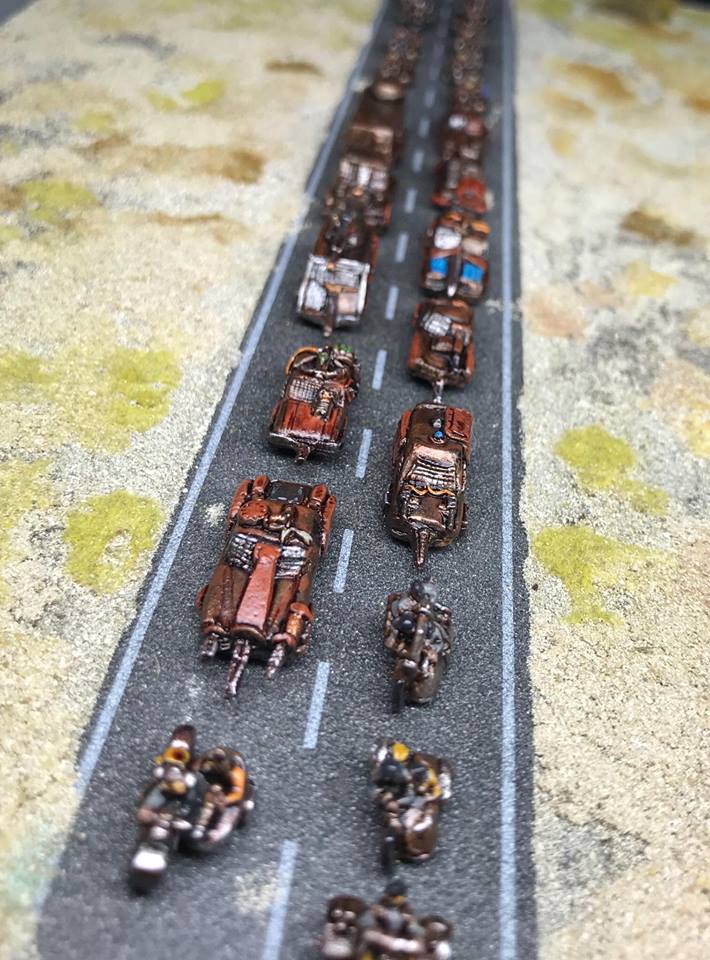 This is versions of the Bushmaster and a Truck from Heroics & Ros with an interceptor vehicle from Microworld games (this is the one of their new vehicles).  This is some kind of Police force still trying to retain law and order or something like that!

These are the more stylish bad bunch driving around in heavy limos (Onslaught Miniatures – order through Vanguard) and some more mobile off-roadish cars to support the main body (from the new Microworld Range).  I also include a Bush Master to the column – stowage based on some offcuts and piece from Perfect Six (link here).  They are know to offer protection to the various settlement in the wasteland and their Leader is know as Don Key Le Ono. 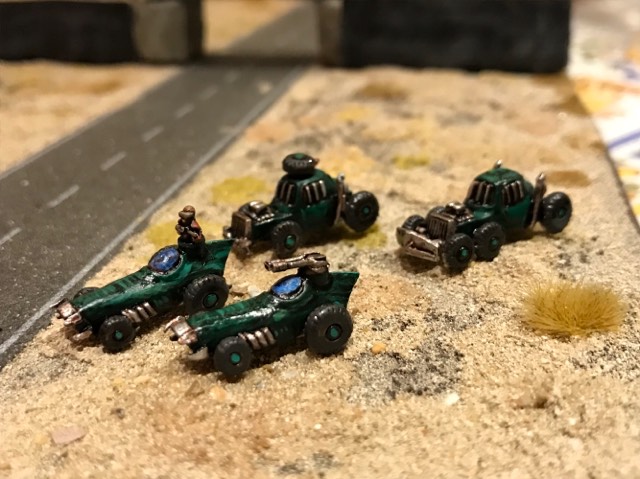 As for the Road Wolf Rules, I and the Little One had a go at it (we actually had two games) and we really enjoyed it.  We played hunter and hunted scenario and as I said before the cars only do relative moves and the last move every round is done by the road, whereby obstacles that are randomly generated and appears at one end are moved down the board. These obstacles are done as cards, but instead we made bases to represent wrecks, debris, tunnel, oil spills, etc. We had a good time and these rules are really fun and you can download them and all the markers you need here (thanks Sean Patten for these!).  The rules works perfectly at this scale and remember the board is 40cm by 20cm at 6mm scale – proper travel sized road battle. We just used a 2cm movement stick and it worked.  Yes the bases are bulky and could be improved, but we really had a blast with it as it is.  Here as some pictures from one of the games (I had only painted the Metalheads and Bikes at this stage) with the Little One and we got a thumbs up in the end – all is good. 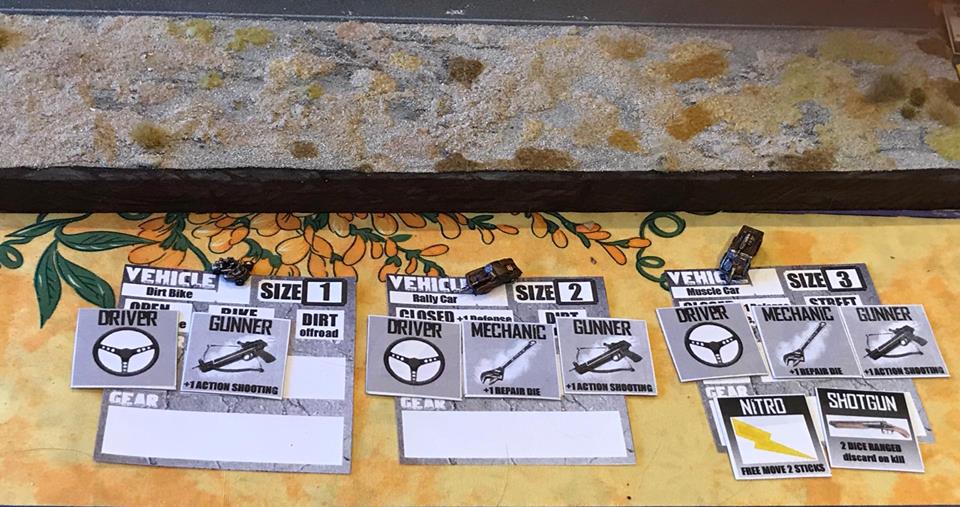 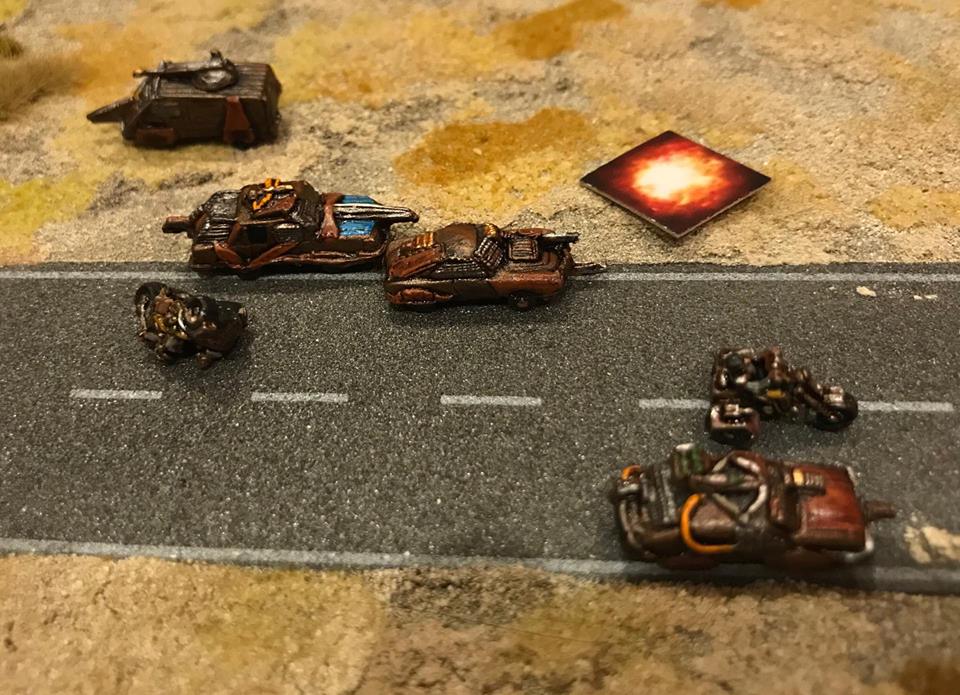 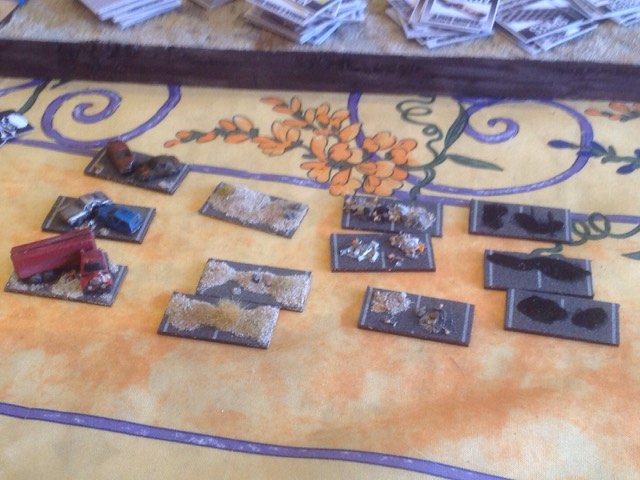 A Meeples and Miniatures Jingle

Remember that You were warned!

You may be aware I am a fan of the Miniature and Meeples podcast (more here), it has been playing in the background of many of my hobby sessions and le(a)d me astray on strange purchases over the last few years.  They are also all-round nice blokes.

I found myself sitting on the train the other day – one of those delayed ones, a seriously delayed one.  My iPad battery was flat and my phone had a battery percentage that would not even pass as a weak lager. I did something as novel as flipped through a free magazine and my middle-aged rage seemed to wake up by the reflection on the earliness of all this Christmassy stuff.  I am a great fan of Christmas when it is Christmas!  But I need to hold that thought for a moment.

Next too me sat three young university students, wonderfully enthusiastic and discussing some assignment in creative writing they had, which was to write some short advertising text for something that meant something to them.  I looked out of the window and felt Creactive and got my Laptop up and asked them if I could join in, then I wrote this – a seasonal jingle for the Meeples and Miniatures Fabulous Four (being the Three Wise men and the Guru!), with some hints to some other associated companies, people and other related stuff.  Merry Meepleness to you all! I got so into it that it actually cheered me up and when I finally looked up from the screen the students had fallen fast asleep!

A long time ago in a galaxy far, far away three of the wisest of the Meeps were on yet another exciting Geek Tour.  The tour was in fact a search mission, loosely based on a linear scenario thread called “Finding Guru” from the book by the Rogue Merchant of recycled shampoo bottles.  They had been given their mission by a multi-headed, and to be perfectly honest too fat, lardish bloke on the veranda of the St. Albanjo Inn. The Albanjo was an excellent inn and did the best tasting Mead, Cyder and Ale in the Meeplands and the view from its veranda was simply breathtaking. They also served culinary delights from far afield and the menu included dishes from the exotic lands of Dahlia. Two of the most famous dishes were the phenomenal banana oil infused Imaginuts from Mahradur and the Pointless Pancakes from the Mountainous Island of Lankasri. The innkeeper was allegedly called Henri but no one was sure, as they never had seen him, as he liked to hide.

One of the Lardish man’s heads had offered them a good basic remuneration for their services whilst some of the other heads offered stretch goals if they did better than expected. The mission was simple: find Guru Luff (Hail Guru Luff!) who had left his Temple of Restrain – also called the Luffschuck on Meeplestrasse 52B.  Why the Guru (Hail Guru Luff!) had gone was long forgotten. History became legend. Legend became myth. And for many, many episodes, over the seasons the reasons passed out of all knowledge.  There were whispers, in places few mortal beings dared to go, that he (Hail Guru Luff!) was seeking penitence for the secret little affair known as the Dungeon Saga Excess.  There were also other rumours of him (Hail Guru Luff!) getting involved in the wrong way with the crime family Don Key Le Ono, who were heading the Thieves Guild in the City of Dilution. They had to search deep, very deep, to find him.

The Lardish man gave them the following advice – Trust no-one!, stay alert!, keep your dice handy! Do not roll ones!.  They could see something emotional in his many eyes and this was game-mechanically-represented by a few shock markers being placed next to him.

Their journey since then had been eventful and they had even managed to move more than six inches (before Gerry had a go) through the 7th continent.  They had travelled through the seemingly never-ending Desert of Gaming Dilution (where death had tried to hook them up for a game of combat chess), avoided the temptation of sausages, survived the many things that falls from shelves during firestorms, being attacked by the dreaded balls, outfoxed the Desert Fox, withstood an imperial assault, endured lengthy Open Combat sessions, repelled an attack from Mars although it was commonly believed that all had gone quiet on the Martian front, survived a night at the Mansion of Madness, and suffered the relentless chase of the mighty Barbarian.

A butterfly landed on his stretched out hand and he could see a myriad of colours, patterns and shapes on its wings. He was known as the undisputed, or at least as one of the many, Welsh Wizard(s) and was the most industrious of the Meeps and with his magic could control shelves to his advantage and summon big boxes of stuff that appeared from nowhere. He was known from the Epic Sagas and had recently assembled five fantastic armies to do his bidding and had a not-so-secret-project-anymore to conquer this fantasy world.  Tiredness had been a problem for weeks, but this very morning he had realised that he had forgotten to deactivate three fatigue markers he had been carrying in his backpack all this time.  The markers had been thrown away and now he felt as fresh and reborn as that fashionable Wizard from the commercials who had changed his clothes line of robes from greyish to nice glowing whites! Oh Lord, that jingle was still ringing in his ears!

The most sensible of the Meeps, the Troubadour was riding on one of the Godfather’s unpainted Norman horses in front of the others.  He carefully swallowed the last pieces of a cake he had snatched from a master baker in Linnius – it was delicious indeed.  He picked up his lute from the saddle bag and started to play a nice little melody.  The lute was a precision instrument and dimensionally printed thrice on a flat G bed – it did sound very nice although the Wizard was still sceptical to the tonal quality of something created with mere technology and not by pure welsh magic.

The Troubadour suddenly burst into his best tune “I aint been Dunked yet Mama, and by the Way here are the dates for the Herewards Wargames Show this year”, an allegorical song about the adventures of a Digestive Biscuit and its fear of being dunked, based on the true story of a young spearman. The lyrics had been revised many times following heated discussions with the Wizard and a Veteran Cookie who had known the spearman.

The last of the Meeps was perhaps the foremost of them all and he had been the longest serving disciple of the Great Guru (Hail Guru Luff!).  He sat in concentration and pushed his hand forward and flicked his hand to the right and pushed it forward again, he repeated he movement again and again – Never was he going to fail in opening a door again!.  He was too tall to be a dwarven warrior and had instead decided to become an Imperial Storm Trooper.  However his dream was short-lived as he was successful in completing his marksmanship course and consequently thrown out.

Since then he had tried to spread the word of Wargaming to the world. In the beginning it was not easy and he had been lonely and he had to whisper his messages. But he slowly acquired companions along the way to help him on his quest and the number of followers grew. Now he had a strong following and did not need to whisper anymore, he could now speak up and stand proud. It was full on charge from here on and forward! He was now the Godfather of all things Meeply and Small!

…..That’s enough of that, they are really good!…

My Tweets
Join 2,724 other followers