Recently I have been rummaging around my various past projects and  found a fair few forgotten ones – they all seemed like a good idea at the time. I felt myself obliged to consider whether I could reignite the fire/impulse that had trigger the start of these projects in the first place – if not I may as well get rid of them.  These projects range from a number of unopened packs to being considerably started and with a few bases even being completed!  I thought one way of going about this process was to paint a few models for each project and then see how I felt in taking them to the very end.

The smallest unfinished project I found was a little vignette Peter Berry gave me at the Baccus open day a few years back. This is normally held the day before the Joy of Six and gives a chance to see how Peter and Igor produce the little soldiers.  The model depicts two 6mm scale war gamers playing a war-game. I decided to give it some acrylic love and base it up. I thought it would be fun to plant it on the table for the next outing and see if someone spots it. I wish they were all that easy!

Note: I added the BIC pen with a diameter of 9mm to the picture as I occasionally are being contacted by people who wonder how tall these guys are. In general when we refer to scale in Xmm it is the measure of the height from the base of the miniature to the eye level or the top of the head. Baccus in general are between 6 to 7mm and the two gentlemen here are 7mm (the bearded bloke) and 6.5mm (the accountant) respectively.

In the next section I will be showing 15mm soldiers and these are of course about 15mm from the base of the miniature to the eye level.  But remember that these scales are indicative and the actual size of a Xmm miniatures can vary significantly between different manufactures and sometimes even between their ranges.

I used a BIC pen as it is probably one of the most known items on the planet (I made that up!) and based on my extensive research has sold over 100 billion pens since the 1950s that is enough pens to stretch 40 times the distance from the earth to the moon if laid end to end. 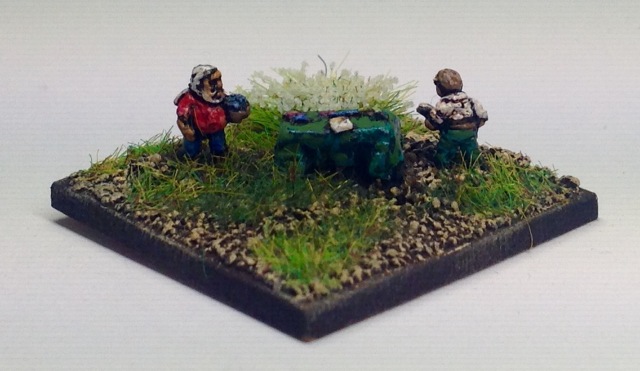 Another, and perhaps a better example, of these projects was to use the Skirmish campaign books and the Arc of Fire ruleset to do some early France 1940 WW2 platoon level scenarios. I had started painting a few of them but there was still some work to do.

I intend to put some effort into this and use the excellent Chain of Command rules from Too Fat Lardies. I printed out the Chain of Command army list  for the German 1940 platoon (you can download it here) and checked that I had the right amount of miniatures (these being 15mm and mainly from the excellent Peter Pig range) and realized I had most of what I needed and fairly quickly over the last few weeks got to a state of having them all block painted and based. This included some support options like anti-tank rifle, AT-guns, infantry gun, sniper team, heavy machine guns, flamethrower unit and a forward observer. What remains is some washing, highlighting and base detailing. They are individually based on 15mm washers (with a magnet in the hole) and prone LMGs, heavy machine guns, 50mm mortar and AT rifles on small flames of war bases.  I base the AT and Infantry guns on medium flames of war bases.   In addition I need to do some vehicles, but this should not be too difficult for early Germans!

I have also made good progress on the BEF 1940 Platoon using some old Skytrex and Peter Pig Miniatures. We should be able to wrap this project up in a not too distant future.

I was saddened to hear that Joe Dever had died a few days ago. He was one of my childhood heroes who allowed me to become one as well every now and then in the fantastic world of Magnamund. I met Joe a few years ago at a gaming convention where he was busy taking pictures of the proceedings. We had a short but very enjoyable chat. Hats off to you Sir!

The picture is of the Swedish translation of his first game book “Flight from the Dark”.

/ Have a good week