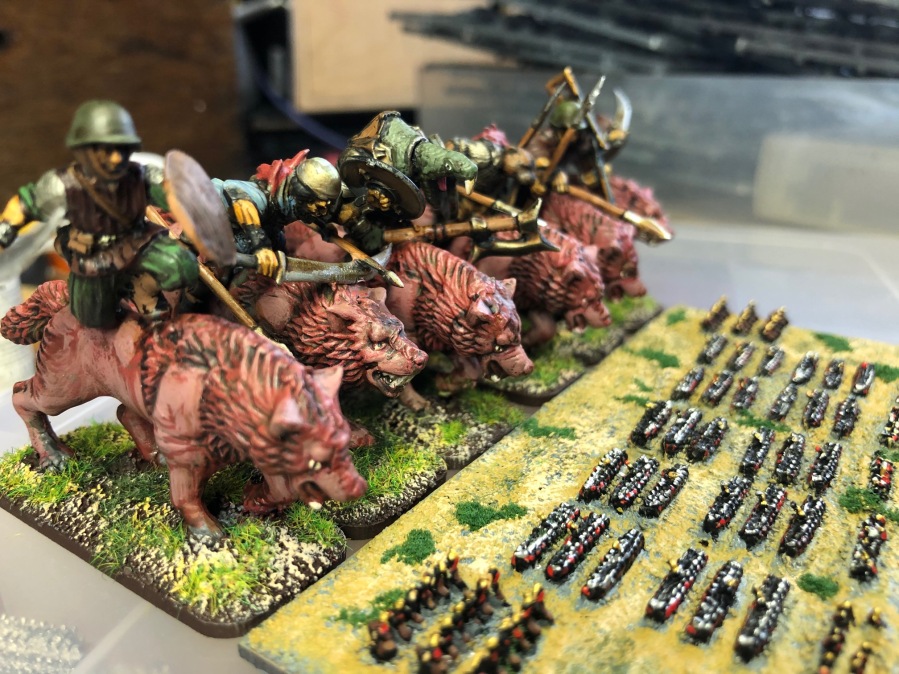 Another weekend coming to an end, but some hobby time was found.

Mark Backhaus, who you may know as the General of the Denswe Army of the Charity Project I am running (or perhaps as the chap who turns out all those interesting articles in Wargames Soldiers and Strategy) asked if I wanted to do some playtesting of upcoming ancient rules Homunculus Est using my collection of Punic war 6mm stuff. Of course I was! I will play test it with the Little One.

The rule set aims to be a fast resolution Ancient battle wargame, playing very big battles on smallish tables. It is specially designed to be played in smaller scales creating a spectacle of big formations battling each other. Mark has done some amazing bases showing massed formations in 2mm and although I do have miniatures to try out the rules in 6mm I thought I could have a go at making a few big 2mm bases.

I ordered a starter pack of 2mm Romans from Irregular Miniatures (link here) to have a see how it would be to work with the scale. I had a done a try as few years ago and I did not like it, it felt like there were just small blobs shaped in some kind of manner to look like something but too small to get into some detail, compared to the 6mm and above I was used to.

However I have been blown away of some of the works done by some of my friends recently like Mike Hobbs, Vlad Seabrook-Smith, Sidney Roundwood and Mark himself.

The trick is just the same as I found in my large 6mm battles where I try to create a spectacle reminiscent of the old battle paintings that fascinated me as a youngster (here are few examples). It is really about focusing on being artistic to reach something looking realistic. A massed line of 28mm miniatures will look realistic but you need a bloody big line to really give the realistic look of a “big” battle.

Anyway some pictures and some narrative how my little test base went.

On the whole I am really happy with this and will get some more to do the bases for playtesting Mark’s rules using 2mm big bases, my notes are:

I wrote last time about my take on Infamy! Infamy! setting it in my childhood haven of Mutant 1984 (more here). I did do my first unit of some cavalry in my Laug Warband, loosely based on the Gauls in the rules.

These are the Red Riding Wolf Riders and were made using a combination of Oathmark Wolf riders, some ancients plastic sets and some WW2 plastic sprues and some animal heads from Sally 4th.

/ Hope that was of some interest! Have a good week.