This weekend I and the Little One tried out a version of the Men who would be Kings rules by Dan Mersey, we played the Skirmish version (kind of, we actually played it like we had 12 figures per unit although we only used 6 models, but we needed two figures worth in terms of damage to remove a model) with some borrowed items from the FOCH WW1 rules adaptation that you can download from Wargames Illustrated here (covering Tanks, anti-tank guns and squad LMGs).  We call it the Mutants who would be Emperors – as it is set in the weird world that is my take on the Mutant universe as presented in the Swedish Rpg from the 1980s (your Mutant may vary, more here).

Basically following a deadly and incurable epidemic caused by samples from a mission to Mars the human civilization collapses. The survivors build enclaves and start experimentation on humans and animals, in effect creating mutants, to see how they will survive outside the enclaves. However conflicts arises between the enclaves and it leads to a nuclear war sealing the fate of the world.
Fast forward a few hundred years and the from the ashes new civilizations start to emerge with mutated humans and animals, some “pure” humans and even some mutants with mental powers. There are remnants of the old worlds scattered all around, and some androids/robots from the old days are still around. In addition there are certain areas where the effect of radiation has left some strange effects on the flora and fauna and these areas are called “Forbidden Zones”.
The game is set in Scandinavia, but not as we know it today, and the general level of new technology is equivalent to that of the early 19th Century, give or take. There are steam engines, muskets and some emerging rifle like weapons, heliogram for communication, etc. Some of the old technology has survived but is rare.

In short anything goes, it is a world that has started to re-build itself with a technology level of about 18th century give and take but there are some old tech weapons floating around – this is represented by the three different level of firearms in the rules (antiquated rifles, rifled muskets, bolt action rifle, basically differing in terms of range. We may review this moving forward and consider some reloading rules), basically giving each model using one of these a 2d6 (as we are using 6 per unit) in terms of rolling for damage.  For other weapons (automatic weapons, lasers, etc) we assume them having a damage of 5d6 (each LMG costs 1 point) – this gave some units we used a very high fire power rating – being difficult to take down but not impossible for a unit prepared to charge in and fight hand-to-hand. We also used a tank and anti-tank gun in line with the FUCH rules.

The scenario was a straightforward fight between two border detachments, one from the large Pyri-Commonwealth and the other from the small but proud Jemtland north of the Pyri-Commonwealth, during the short but eventful Yran Hostilities that almost led to an outright war in the year 96 (or 2550 if you still count in AD).

The Pyri-Commonwealth side has stopped to re-supply at a depot that is well stocked with water and other essentials, very close to the entrance to a small forbidden zone in the Hamra region in the northern part of the Pyri-Commonwealth. The depot is run by the Nicholas von Rijn trading company and a good deal has been made, a few drinks have been had and there are rumours that Furir Dozibugger has had a few too many already (Typical for the Pertorian Guard – elite status in what?, drinking and hazard gaming).  There has been reports about some mutated monsters in the area – a walking murder tree and a giant beetle – both are very aggressive towards humans and extremely dangerous.  There is enough firepower in the detachment to take them down but invariably a few men or women would have to put their lives on the line in case of an encounter – and they do not fight with caution.  Suddenly the Rifle units comes back running, they  report movements on the other side of  the old ruins – “It is those damn Jemts again. Prepare for engagement…. to arms, man the tank and attack!”.

These are the units we used for this battle:

And of course the wandering monsters, they will attack anything moving within 6 inches and anything firing at them with a movement of 6″+1d6, attacks at 4+ and will deliver 12d6 worth of damage as well as taking 12 points of damage (both counting as being in light cover due to protective bark and scale). The murder tree is from Fenris Games (a dark young of Shub-Niggurath – link here) and the Giant Beetle a plastic toy (made in China) that I was gifted by Michael Leck.

What follows in not a AAR but a set of pictures from the fighting, with some comments, as we were mostly using this to try out the rules – we had a blast playing and the craziness of it all really adds to the fun!  What made it even better was that the Little One had done most of the planning and I just had to, more or less, sit down and play. We plan to run the game again and perhaps we will do a better narrative of the battle then. 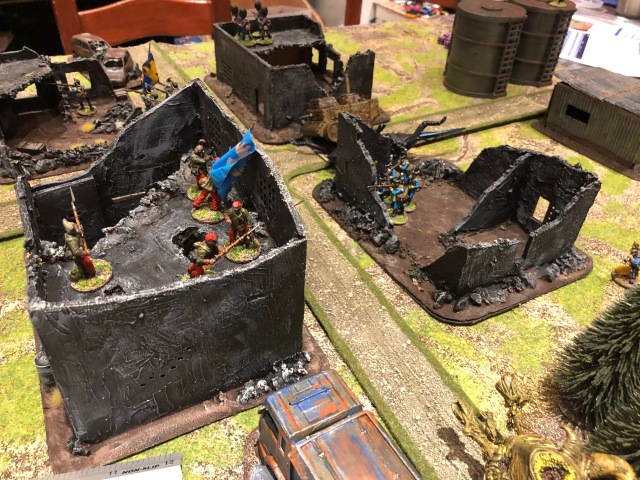 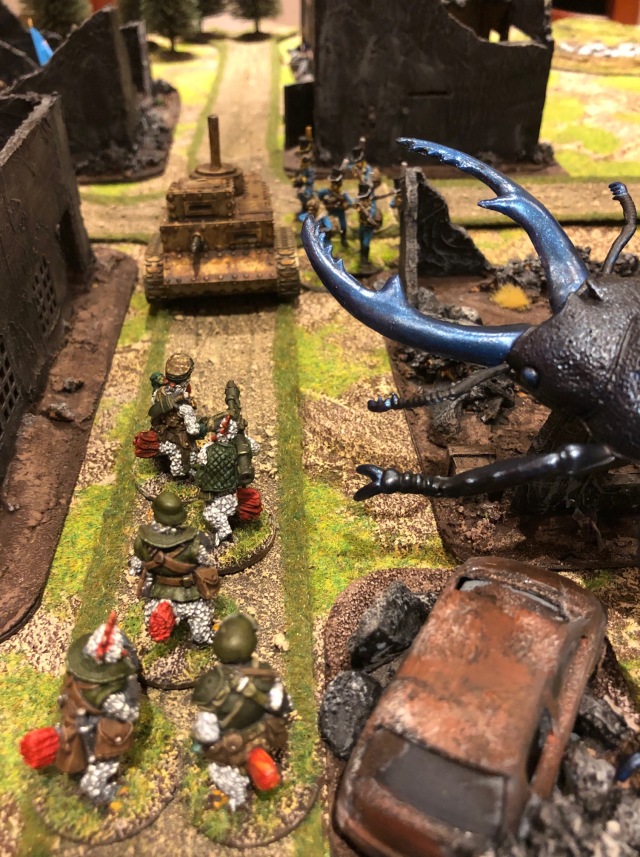 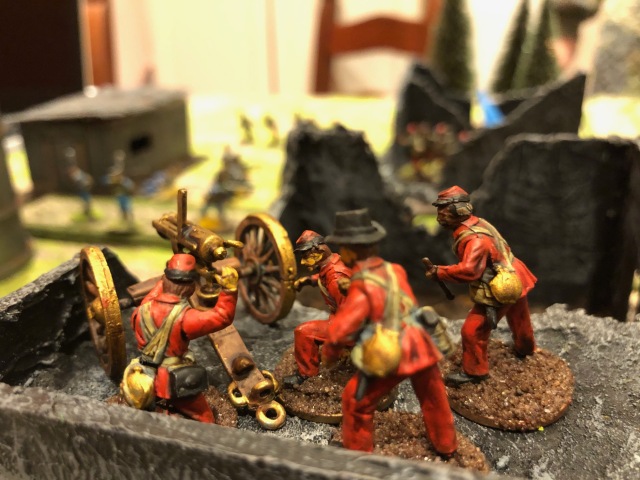 Absolute blast. It is funny that I am playing a game with my son being the same age I was when I first adventured in this world 35 years ago. / hope that was of some interest!